You are here: Home » Torah » A Split Parsha, A Split Vision

A Split Parsha, A Split Vision

B’ha’alotkha is rich with many stories of the challenges, adventures, and misadventures of Bnei Yisrael’s travelling from Har Sinai and moving towards the Land of Israel. What is visually the most striking is the parsha of “va’yehi binsoa ha’aron,” “and it was when the Ark travelled,” which occurs in the middle of the parsha, and is set off by inverted Hebrew-nuns. As is stated in Shabbat 116a, in the name of Rebbe, this division indicates that the parsha of “Vayehi” is a sefer in its own right, and it divides the Torah into 7 books (Breishit, Shemot, Vayikra, Bamidbar pre-vayehi, Vayehi, Bamidbar post-vayehi, and Dvarim). What is the significance of dividing the Bamidbar into these two halves?

I believe that this parsha signals a key transition point. From the middle of Shemot onwards, Bnei Yisrael have been at the foot of Har Sinai, receiving the Torah, building the mishkan, receiving the commands regarding the sacrifices, and setting up the camp. They are now, finally, prepared to move forward. The key question that is introduced at the beginning of Bamidbar, is how will they move forward from Har Sinai. Will they be able to leave Har Sinai and to keep the mishkan in the center, and to continue to orient themselves towards God’s presence?

Of course, they immediately fail this challenge, and as soon as they move forward, right at “Vayehi”, they begin to complain for meat. They have lost their center, their focus. It is instructive to compare this complaint, and these murmurings for food, to the complaint and murmurings for food that occurred prior to the giving of the Torah in Shemot 16:2. There, the people were not punished by God, and God granted them the manna. Here, the people were stricken by God, and many were killed. Now, on the one hand, the difference is simple. Earlier, they had no food at all, and they asked for bread – the bare necessities – and were given it. Here, they have the manna, and what they ask for is an indulgence and a luxury. This is borne out in the Torah’s emphasis of hatavu ta’avah, they lusted a lust, and in the description of the eating of the quail. But I believe that another difference is also at play, and that has to do with the question of unity. In Shemot, it is the nation asking for the sake of the nation – “And the entire congregation of Israel complained, ‘For you have taken us into this Wilderness to kill this entire congregation in famine.” Whereas here there is complete self-absorption and self-centeredness – the rabble begin it, it is not coming from the nation as a whole, it is about desire – not necessity- which focuses on the individual’s cravings, and there is no mention of the nation’s interests or concern for its well-being.

What has happened is the difference of moving towards Har Sinai or away from it. When the people were moving towards Har Sinai they were brought together – externally, by the fear of Pharaoh’s pursuing armies and by the shared need of survival (the necessity of bread), and internally, by the shared vision to follow God, to follow Moshe, to become free, and to arrive at Har Sinai. And at Har Sinai this unity was fully realized – “And the people encamped” – “as one person, with one heart.” Now, however, begins the move away from Har Sinai. Now that they are not moving towards the vision, but have achieved it, and have received the mitzvot, and must move forward with the vision. Now, Pharaoh’s armies are no longer pursuing them, and their most basic needs are taken care of. It is now that they are at the greatest risk. What will hold them together? There is no external pressure, and without the goal of arriving at Har Sinai, it is unclear that they, left to their own devices, will be able to sustain the vision that will unify them.

This vulnerability when they move is true in a practical sense as well. For when the camp breaks, and spreads out to travel, they are the most vulnerable and can be picked off by the enemy. Amalek attacked the stragglers, and it was the role of the tribe of Dan was to gather all those who were left behind. The trumpets are needed to gather the people before the move, and to coordinate the move – to be the external structure that holds them together as they move forward.

It is because of this vulnerability, that we find the unexpected mention of ‘enemies’ in the “Vayehi” parsha. “Arise, God, and let Your enemies scatter from before You.” For when they are moving forward, they are most vulnerable, and they must pray that their enemies scatter. And when they settle, and re-erect the mishkan in the center of the camp, they are more secure, more able to establish our center, more able to sustain their unity. Shuva Hashem ri’vevot alfei yisrael, “Return, God, to the myriads and thousands of Israel,” bring all the myriads of Israel together with You in the center.

With a settled, focused, concerted effort we can re-establish our shared vision, our center, and our unity. But when we are moving and things are in flux, then we risk losing our center and losing our vision. With a shared vision, no hardship is too great. Without a vision, then every tiny problem becomes a hardship. We focus on our own cravings, and we even seek out new ones. We spread out, we fight, we bicker, and we suffer.

Bamidbar is, in fact, broken into two halves. Before they moved from Har Sinai and after they left Har Sinai. Would they be able to leave Har Sinai and keep the mishkan in their center? Would they continue to sustain a shared vision or would they be a tinok haboreyach mibeit hasefer, an child running out of school, casting the vision and the mission behind as quickly as possible?

We know how Bnei Yisrael fared and how they failed, until they reached the end of their wanderings, and arrived, in the book of Dvarim, the next sefer, to a place where they could once again have a shared vision, the entry into the land of Canaan.

How, we must ask ourselves, do we fare in this regard? At times when our home life and communal life is stable, let us work to erect a mishkan in our midst, to articulate a shared vision, and work to build it together. And when we are in times of transition, and the most vulnerable, let us work to sustain our vision and our unity of purpose, so that no hardship is too great, so we can free ourselves from nonsense, meaningless cravings, and pernicious and destructive squabbles, so that when we settle again, our unity will be established, our vision sustained, and God will be in our midst. 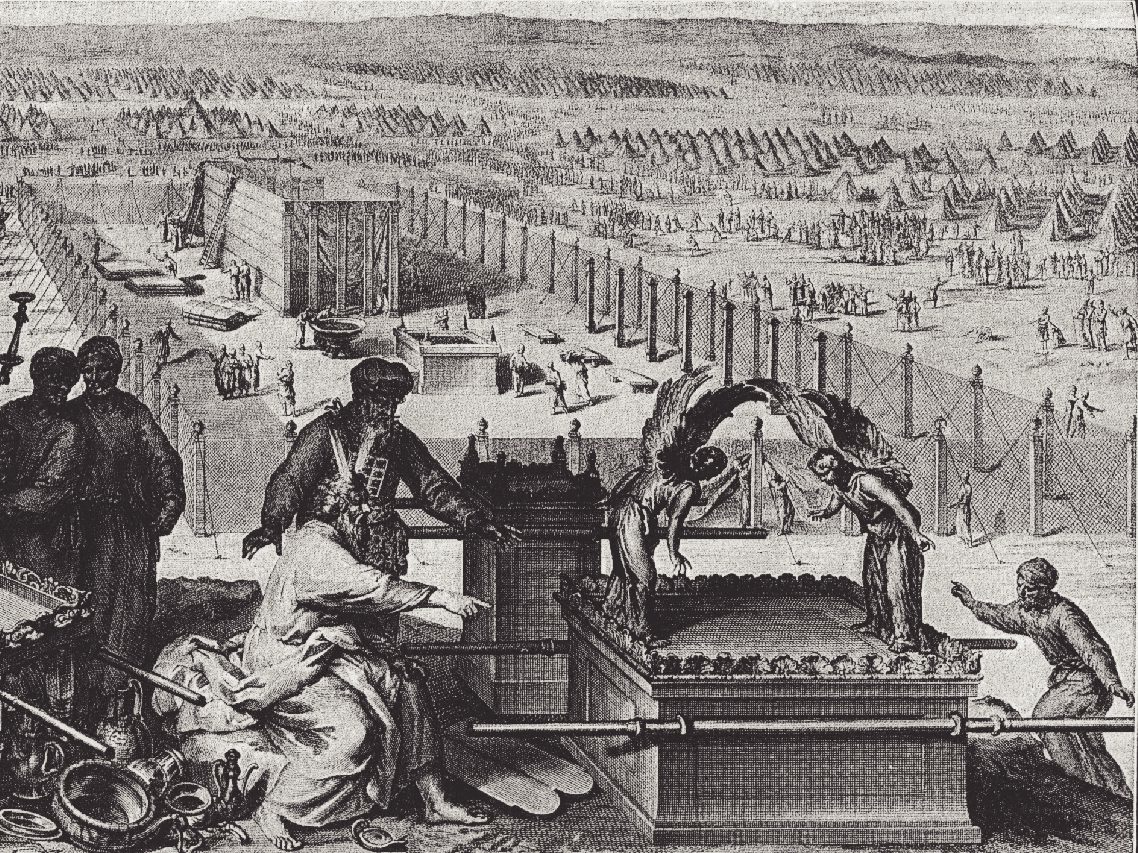