You are here: Home » Halakha & Modernity » Women in the Synagogue – the Mechitza and the Ezrat Nashim

Women in the Synagogue – the Mechitza and the Ezrat Nashim

Regarding mechitza we find 3 models in the achronim. There are those that say that it is to prevent kalut rosh – levity (based on the Gemara in Sukkah regarding the simchat beit HaShoyeva, the festival on Sukkot for the water drawing). This then divides into two possibilities: (1) To prevent men from seeing the women and having sexual thoughts (Chatam Sofer) and (2) To prevent an intermingling of men and women, as a mixed-gender environment is deemed inappropriate for the experience of tfillah (Rav Moshe Feinstein). Finally, there are those who base it not on kalut rosh but (3) on the Beit HaMikdash, where there was a women’s section – an ezrat nashim, other than the men’s section – the ezrat Yisrael (while women could go into the ezrat Yisrael when necessary, that space was primarily designated for the men).

These 3 models lead to very different ways of thinking about women’s presence in the synagogue and to very different types of mechitzot. The first approach – that men not be distracted by seeing women – makes women the problem and the men the ones who need protecting. This leads to an attitude which is primarily focused on the purity of men’s prayers and not on the quality of women’s prayers. It also leads to mechitzot that completely hide the women, as mechitzot to address this concern would have to be over the heads of the women and opaque. To address the “problem” created by women, women are made invisible.

On the other hand, if the problem is a mixed-gender environment, neither men nor women are the problem. Both are treated equally. Both have a right to pray and to pray in an appropriate environment. This is achieved by creating separate spaces for each of them. The result is also more inclusive – according to this, the mechitza can be transparent and it also need not be as high (54 inches according to Rav Moshe, 50 inches according to Rav Soloveitchik, and some would say even 10 t’fachim, although this latter height is only rarely practiced). While the practical parameters are not clear if one follows the final approach, that of the Beit HaMikdash, what is clear is that this model implicitly makes the men’s section the only “real” place of prayer, just as the ezrat Yisrael was the only real place of the service in the Beit HaMikdash (the ezrat nashim functioned more like a social hall).

Thus, how we understand the basis for mechitza has a profound influence on how we think of women’s place in the shul – do they belong? Are they a problem that needs solving? – and on how we actually construct the mechitza and in practice create shuls that are more or less inclusive. Of course, other considerations, such as where the mechitza is placed, the amount of size relegated to the women’s section, and a myriad of other subtle and not-so-subtle architectural features and practices also communicate powerful messages of inclusion or exclusion. [Sometimes it is so subtle we don’t even register it consciously. For example, the words da lifnei mi atah omed, “Know before Whom you stand,” which are placed over the aharon are in second person masculine. What does that communicate to the men and the women as to who are the true daveners. Wouldn’t it be much better if we sought alternatives, such as shi’viti Hashem li’negdi tamid, “I place You God before me always” – a statement in the first-person which applies equally to men and to women.]

This question of whether women are seen as belonging in the shul also relates to the debate about whether when women are considered to be part of the minyan when they are present. Does their tfillah, when they pray with a minyan of men, count as communal prayer, as tfillah bi’tzibbur? There are those who say that the tfillot of women davening with a minyan count as individual prayer, as tfillat yachid, and not as tfillat tzibbur, that even when present they are not part of the tzibbur. Rav Soloveitchik, Rav Vozner and others unequivocally reject this and assert that while women do not make the core minyan, they are unquestionably part of the minyan when present, and their tfillah is considered to be a tfillah bi’tzibbur.

The halakhic status of the ezrat nashim is also related to this question. According to a number of poskim, the ezrat nashim does not have the same sanctity of the men’s section, and according to some opinions it has no sanctity at all! Thus, for a synagogue considering making structural changes, these poskim do not allow any of the existing men’s section to be used for the women’s section, because that would be a lowering of its sanctity. If one assumes, like the opinions above, that women are not part of the minyan or not really part of the shul, then this conclusion is understandable. However, other poskim reject this. The Arukh HaShulkhan, for example, states simply that the ezrat nashim has the full sanctity of the beit haknesset. And Rav Moshe Feinstein, when dealing with the question of whether part of an ezrat nashim can be made into a mikveh, discusses the matter at great length in a teshuva and never considers the possibility that it has any less sanctity than the men’s section. This position, of equal sanctity, is what is to be expected if one understands that women are part of the minyan and also if one understands, like Rav Moshe, that the mechitza addresses men and women equally.

Finally, it is worth noting that architecture can effect halakha. Rav Yehudah Herzl Henkin rules in a responsum that if the mechitza does not go up to the ceiling, or if the men and the women can see each other, then they are all considered to inhabit the same space. Thus, if the mechitza is built based on the more inclusive principles above, it actually defines halakhically that the sanctuary is not a space for men, but a space that men and women equally share. 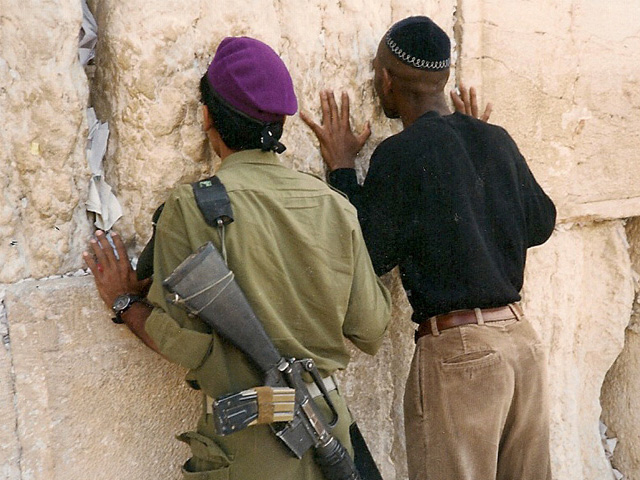