You are here: Home » Torah » Blinded by the Light

This parsha is not, however, a simple duplication of the earlier parshot, and there are two striking differences in the sequence of the commands and their execution. VaYakhel opens with the command of Shabbat, and then turns to the command of the Mishkan. In contrast, when originally commanded, the command of Shabbat had followed that of the Mishkan (Shemot 31:12ff). The other difference is the order of the construction. Whereas God had first commanded the building of the Ark (Shemot 25:10ff), here the command of the structure – the Tent – comes first (Shemot 35:11) and its execution comes first (Shemot 36:8ff). Rashi famously notes this change with the following story:

Moshe commanded Betzalel to first make the vessels and then the Tent.

Betzalel said to him: the practice of the world is to first make the house and then to put the vessels in it. Is this perhaps what you heard from God? [text following Berliner ed.]

Moshe said to him: You were in the shade of God (b’tzel El)! For certainly this is what God has commanded me! (Rashi, Shemot 38:22. See Berakoht 55a).

Within the context of this Midrash, we can ask – if this is true, why was Moshe originally confused? And at a pshat level, we can ask, what is the meaning of these differences of order between our parsha and the previous ones?

Regarding Shabbat and the Mishkan, regardless of order, the meaning of the juxtaposition is clear – not only that Shabbat is the other locus of kedusha, a kedusha of time and not of space, but also – as Hazal understand – that the kedusha of Shabbat is inviolable, and that even the building the Mishkan cannot supersede the Shabbat. While the building of the Mishkan is a once-in-a-lifetime opportunity, and it is the process of bringing God’s presence to dwell among the people, it cannot override the regular, stable, foundational kedusha of Shabbat. The religious passion for achieving the intense connection to God is a powerful and laudable trait, but it cannot supersede the day-to-day serving of God.

The building of the Mishkan, then, must give way to the regular weekly kedusha of Shabbat. But the order of this juxtaposition also matters. The question still remains – are we to have a religion, an approach to God, that focuses on the passionate, intense experience of connection, or are we to have a religion and a connection that focuses on the day-to-day? Does our approach begin with Mishkan, but Shabbat serves as the ultimate constraint – our religious passion, our intensity, is the core, but it cannot override Shabbat? Or does our approach start with Shabbat, that our day-to-day kedusha is the core, but recognizes that we must seek out those opportunities of intense connection to build on that stable foundation? Our parsha weighs in favor of Shabbat. Our religious life is a life of Shabbat, not a life of Mishkan. It is founded on the kedusha of the day-to-day, not the kedusha of once-in-a-lifetime; it is founded on halakha, not on spirituality. Yeshayahu Leibowitz put it beautifully:

Resting religion on Halakha assigns it to the prosaic aspects of life, and therein lies its great strength. Only a religion addressed to life’s prose… is worthy of the name. This is not to demean the poetic moments, the rare occasions when a man breaks away from the routine, the experience of rising above the self spiritually and emotionally, the deeds performed fervently. It is quite possible that such moments mark the zenith of a human life. Nonetheless, the fundamental and enduring elements of human existence are in life’s prose, not its poetry. Moliere’s M. Jourdain discovered at the age of forty that he had unwittingly been speaking prose all his life. No one ever claimed to have been talking unwittingly in poetry…. The religion of halakhic practice is the religion of life itself. (Yeshayahu Leibowitz, “Religious Praxis,” in Judaism, Human Values, and the Jewish State, p. 13).

What happened between the previous parsha and this one? The sin of the Golden Calf. The Golden Calf was religious passion and fervor gone awry. For it is so difficult, so impossible, to sustain the fervor, to sustain the experience of Har Sinai. And when that cannot be sustained, and when the people can only focus on it as the true religious experience, then they will find false gods towards which to direct their passion. If they do not have a Mishkan to build, they will build a Golden Calf, all in search of reclaiming the intensity of the religious experience.

This is why the second time around the Torah was given quietly, without the thunder and lightning, without the unsurpassable, unattainable, direct connection with the Divine. Moshe receives the second tablets and comes down from the mountain so quickly and so quietly that you would almost not realize that it had happened (it did, in last week’s parasha – Shemot 34:28-29). The people had to reorient themselves to a new Torah, to the second tablets, to a Torah of God’s presence in the quiet, not in the thunder and lightning:

It is the religion of the still small voice that is the message of Parashat VaYakhel.

The focus on the day-to-day does not mean we should not seek out those moments of intense connection, that we should not cultivate our religious enthusiasm, that we should not answer the call to build the Mishkan passion when the call goes out, but we must first build our foundation. Shabbat must precede the Mishkan. And the Tent must precede the Ark. This was Betzalel’ s message to Moshe – while we should strive for the Ark, for the most intense place of God’s presence, it cannot come first, we cannot fix our focus on it. For if we do, we will never build the house, we will never lay the necessary foundation that allows us to achieve these experiences in a meaningful, disciplined way, there will be no house in which to bring the vessels. The practice of the world is first you build your house, then you bring in the vessels.

This is something that Moshe lost sight of. Being directly in the presence of God, he was blinded by the light, blinded by the intensity of the experience. It was only Betzalel, who was out of the direct light, who was in the shade of God, that understood that you need to first lay the foundation. Most of our life is lived in the shade, warmed and enlightened by God’s indirect light, not set afire by it, but also not blinded by it. This is the kedusha of Shabbat, this is the kedusha of our religious life, this is the stable kedusha upon which we can also build the Mishkan and find those moments when we can also transcend the day-to-day and connect to God with passion and intensity, with the kedusha of Shabbat and the kedusha of the Mishkan. 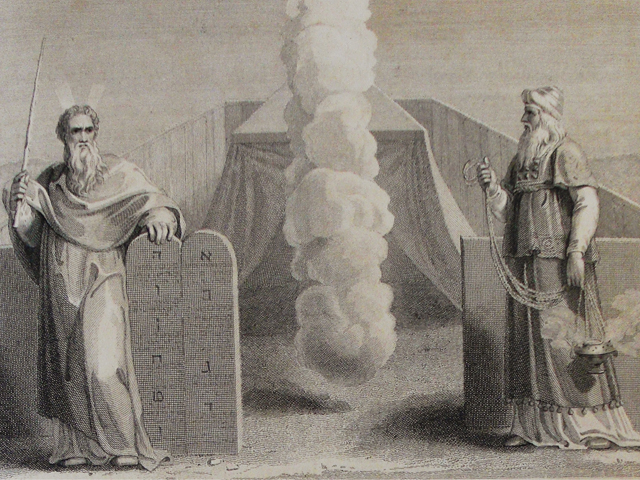