You are here: Home » Torah » Sacrifices, Teshuva and Our Relationship with God

Sacrifices, Teshuva and Our Relationship with God

Parshat Nitzavim always falls immediately before Rosh HaShana, and appropriately so. For it is in this parasha that the Torah speaks at great length about the power of teshuva: “And you will return to the Lord your God and obey God’s voice… you and your children, with all your heart and with all your soul” (Devarim 30:2). This process of teshuva comes, in the Torah’s narrative, after the terrible curses described in the previous parasha, have befallen the nation: “And it will be when all these things befall you, the blessing and the curse…” (verse 1) that you will then repent and return. And your returning – vi’shavta (the root of the word teshuva) – to God will be met with God’s return to you: “And God will return your captivity… and God will return.” (verse 3).

This parasha of teshuva, then, is actually the closing of last week’s parasha of blessings and curses. The Torah there ends its catalogue of curses rather abruptly, “… and you will sell yourselves there to your enemies as slave men and slave women, and no one shall buy you.” (Devarim 28:29). That’s it. You will be in the land of your enemies, afflicted and with no hope, more worthless than slaves. Where is the hope? Will God abandon us there? To this, Nitzavim responds – if you repent, God will return you to the Land of Israel, and you will once again prosper. You will no longer be “cursed… in the fruit of your womb and the fruit of your land,”(Devarim 28:17), but rather “… God will bring increase… to the fruit of your womb and the fruit of your cattle, and the fruit of your land,” (Devarim 30:9). And in response to the devastating prophecy that: “Just as God has rejoiced over you to do good to you and to increase you, so will God make your enemies rejoice to wipe you out and destroy you,” (Devarim 28:63), our parsha echoes back: “For God will once more rejoice over you to do good, just as God has rejoiced over your fathers.” (Devarim 30:9).

It is instructive to compare this narrative of Sin-Curse-Teshuva-Return-Blessing to the parallel one that closed the book of Vayikra. There, the Torah also speaks about sinning and being cursed by God. However, the resolution there is not repentance and return, but rather confession and of God’s commitment to the covenant. Consider: we are told near the end of those curses, “And they shall confess their sins and the sins of their fathers, in their trespass that they have trespassed against me, and even that they have walked contrary to (or haphazardly with) me” (Vayikra 26:40). It sounds like the people have repented, and all should be well and good. But then we read in the next verse: “Even I will walk with them contrarily, and I will bring them into the land of their enemies. Perhaps then will their uncircumcised hearts be humbled, and they accept the punishment of their sin.”

The people – although they have confessed – have not really changed their ways, and have not really humbled their hearts to God. And, even at the end, this goal seems elusive. For we are never told that this change takes place, but only: “… I will not cast them away or despise them to utterly destroy them, to annul My covenant with them, for I am the Lord their God.” (verse 44). It is not our repentance that saves us, but rather God’s commitment to uphold the covenant and to keep the relationship that God has with us as a People.

Why does one narrative include teshuva, and hence a complete return – both of us to God and God to us – whereas in the other narrative this is absent? A couple of possibilities present themselves. On the one hand is merely describing two different scenarios. Sometimes a person – or a nation – will not return fully, and only do a pro forma act of confession, and sometimes a person – or a nation – will do true teshuva, and God will respond in kind to these separate cases – in the first, a maintaining of the structure of the relationship, without its substance, and in the second, a true reestablishing of the relationship, with its full depth.

This answer is fine as far as it goes, but it fails to note another relevant point, and that is the absence of the entire phenomenon of teshuva from the book of Vayikra. For while Vayikra deals at great length with the atonement of sin, it never uses the phrase of shavta or teshuva, nor does it deal with it as a concept. Sins are atoned for through sacrifices and the associated act of confession: ” And it shall be, when he shall be guilty in one of these things, that he shall confess that he has sinned in that thing, and he shall bring his guilt offering to the Lord…” (Vayikra 5:5-6). This is also true at the communal level and regarding the Service of Yom Kippur: ” And Aaron shall bring the bull of the sin offering, which is for himself, and shall make an atonement for himself….”. And again, “And Aaron shall lay both his hands upon the head of the live goat, and confess over him all the iniquities of the people of Israel…” (Vayikra 16:11 and 21). The emphasis here is more on the rituals and acts that achieve atonement, but not on the inner work of remorse, changing of one’s ways, and returning to God. That – the process of teshuva, only explicitly appears in the Torah at the end of Devarim, in this week’s parasha. Why is that?

I believe that the answer lies in how Israel’s relationship with God developed over time. Turning for a moment to a halakhic take on our parasha, the Talmud of the Land of Israel expounds on the verse: ” And the Lord your God will bring you into the land which your fathers possessed, and you shall possess it; and he will do you good, and multiply you above your fathers” (Devarim 30:5), in the following way:

That is to say, your return to the land is greater in the Second Commonwealth than the First Commonwealth, since the land is imbued with and retains its sanctity even though you have no political power. This idea is extended by Rambam (Laws of the Chosen House 6:16) to explain why the sanctity of the Land of Israel exists even after the destruction of the Second Temple, which was not the case after the destruction of the first Beit HaMikdash. The difference, says Rambam, is that the first sanctity was connected to our political power, and disappeared when that ended. The second sanctity, however, existed despite the lack of political power, and thus is perseveres even when we are driven from the land.

Rav Soloveitchik further elaborated on this point, and spoke to the nature of Israel’s relationship to the land. In the First Commonwealth the connection was formed based on real-world and material benefits: political power, and a land filled with blessings – a land of milk and honey. When this stopped being the case, the relationship ended. In the Second Commonwealth, however, life was better outside of the Land of Israel, and many Jews therefore did not return. Those who did return understood that the connection to the Land was much deeper than surface and material benefits. It was a connection that transcended material concerns, and because it transcended such concerns, it persisted throughout all hardship, and could exist even when they were no longer on the land. This relationship, however, could not happen at the beginning. A relationship of this depth had to grow over time. The people had to suffer hardship, and remain steadfast in their commitment to the Land, for the relationship to acquire this depth and this permanence.

What Rav Soloveitchik has said so beautifully in regards to the relationship to the land, can also be said in regards to Israel’s relationship to God. This relationship was initially formed on the basis of real-world, material benefit. God had redeemed them from Egypt and provided for them in the desert. And, as we see, when the people suffered privation, they turned away from God and looked to return toEgypt.

With such a relationship, when things go wrong, a true returning cannot take place, because a relationship of true depth has yet to be established. The most that can be hoped for is a verbal acknowledgement that one has done wrong, and an act that symbolizes the need to fix what has been broken. This is the verbal confession and the sacrifice. It is like a recently married couple that got married because of they were physically attracted to one another, but has yet to develop a deep, lasting relationship. When one of them does something to hurt the other, it cannot be solved by refocusing on the relationship and what truly matters, for the relationship is not there yet. At this stage, it can only be solved by an admission of wrongdoing, and an act – flowers, a vacation, etc. – that serves to make things better. The real danger here is that one of the parties will get up and walk away from the marriage. For things to get better, they first have to be committed to stay in. Hence, when the relationship with God was at this state, the people were only “walking with God haphazardly” as was God with the people. What kept things going was a commitment to stay in and work on the relationship. God is committed to the covenant. 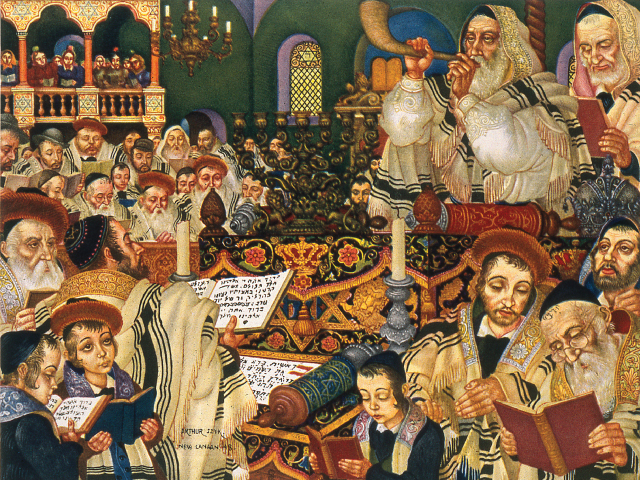