You are here: Home » Moadim/Holidays » Yom Kippur » The Weight of Sin

The Weight of Sin

Sin and atonement are very abstract, colorless concepts. When we discuss such things, we tend to do so in relation to other abstract concepts: “Sin is an act of transgressing God’s will or commandment; atonement is the act of divine forgiveness, or of becoming reconciled and at one with God.” All of this is true, but spoken about this way, these concepts remain without shape and form. As such, they often do not resonate viscerally, and we find ourselves at a loss in attempting to think about them in concrete and helpful ways.

Not so for earlier generations. In our liturgy, in the Talmud, and in the Torah, sin is constantly discussed through metaphors. The power of this cannot be underestimated. Metaphors allow us to experience abstract realities on an emotional plane, away from the intellectual, and help us create an inner religious life that is dynamic and alive. Let us consider two metaphors for sin: that of stain and that of a weight.

Perhaps the most prevalent metaphor for sin in our liturgy is sin as a stain. The act of divine atonement, in parallel, becomes an act of cleansing this stain: “If your sins be as red as scarlet, they shall be whitened as snow” (Isaiah, 1:18); “Then will I sprinkle clean water upon you, and you shall be clean: from all your filthiness, and from all your idols, will I cleanse you” (Ezekiel, 36: 25).

A stain is something dirty and disgusting found on a person or his garments. Sin, then, becomes something that we should find repulsive, that we would naturally recoil from. But it is not just a piece of dirt or excrement; it is a stain. A stain adheres to something – one’s garments or one’s own self. Sin as a stain clings to us, sullying our very person and sullying our clothing, the image that we project of ourselves to others and to ourselves. And when one or one’s clothing is stained, one is embarrassed to go out in public and unable to appear before people of importance or prestige. When sin soils us, we likewise will feel a sense of embarrassment to be in the company of others who are not similarly soiled, and we will certainly feel such embarrassment to appear before God.

It is hard emotionally to think in this way, but it can also be helpful because it gives us a handle on these realities. It encourages us to think about the ways we have hurt ourselves – our soul, our spirit, our inner religious life – as a result of sin. It makes us see the way that sin and bad past decisions can sometimes make us feel that we are not worthy, not worthy to have certain relationships, engage in certain activities, or make certain life choices: “Those are for people who haven’t made the same mistakes that I have, for people who are unsullied.”

But we are not stuck in this state. Most stains are not permanent. We can launder our garments; we can bathe ourselves; and we can become clean. This is the promise that teshuva holds out – we can transform who we are. And if we do this, God will cleanse us; God will forgive – or more to the point – wash away our sin, restoring us, and help us restore ourselves, to our original state of purity and cleanliness.

Sin as stain occurs frequently in the liturgy and in Nakh. In the Torah, however, the metaphor that dominates is that of sin as a weight or a burden. In a brilliant article in Tarbiz, Dr. Baruch Schwartz of Hebrew University looks at the phrase nosei avon, literally translated as “carrying sin,” which has troubled Bible commentators and academics for centuries. This phrase can be used to describe both forgiveness for sin and punishment for sin. We are told in the Thirteen Attributes of God that we recite during the asseret yimei teshuva, that God is nosei avon, forgiving of sin. At the same time, we read that when a person curses God, vi’nasa cheto, “he will carry his sin” (Vayikra, 24:15).

So what is going on here? How can the same phrase mean one thing and its opposite? The answer, writes Dr. Schwartz, is in realizing how sin was understood. It is not just a deed done in the past. It creates a metaphysical reality. It is a real thing, a thing on the back of the sinner, a thing that will weigh him down, a thing that can crush him, that can bring about suffering and even death.

Hence the two meanings of the phrase nosei avon. This phrase means just one thing: to carry the sin. The question is who is doing the carrying. Initially, the sinner is carrying his sin. But if God chooses to forgive the sin, then God will remove it from the sinner’s back; God will carry the sin away.

How does sin as weight differ from sin as stain? We may first note that a weight is something external to a person. As such, sin as weight is more about the sin than it is about the sinner. It is about how what we have done has become a real thing that is now outside of us – a thing that doesn’t go away just because we have changed and done teshuva. We thus find that in verses that refer to sin as weight, the sin is never eradicated. It can be lifted off of our back, it can be put on the back of the scapegoat and sent far away, but it will always exist. When we do teshuva the stains on our selves, on our person, can be completely washed away, but that which was done in the past was still done; it can never be fully undone.

Although this is true, teshuva is still effective. Such a teshuvamust be focused on the sin as well as the sinner and must be directed to minimize the lasting impact of one’s past deeds. If we have shouldered our responsibility for what we have done, then it will no longer have to continue to burden us – the weight will be taken off our shoulders.

Talking in these terms is also difficult. It is hard to face up to how our actions have affected others, not just ourselves. But this can also help us fix it, to correct, to the best degree possible, those hurtful things that we have done. Too frequently we hear of people – often abusers, but also people such as Bernie Madoff and the like – who declare that they have done teshuvaand want to be welcomed back into the community. Thinking of sin as a weight that exists in the world reminds us that teshuvais not just about the person; teshuvarequires fixing the damage done by one’s actions.

This also points to a productive path for teshuva. In the Torah, sin is a weight that can only be removed by the offended party – be it another person or be it God. This should be enough. But sometimes even after we have made amends, we continue to beat ourselves up for what we have done in the past. We are burdened by guilt and self-criticism. We let the sin crush us and hold us back, hold us back in our relationships, our career, our religious and emotional growth. If we have already done the work that we need to do, then it is time for us to remove that weight from our own back.

The Dubner Magid tells a parable about a pauper who was carrying the heavy load of all his earthly possessions on his back and making the long, slow trek from one town to the next. A wagon driver rides up next to him and offers to give him a ride to the next town. After a few miles, the wagon driver looks back into the wagon and sees the man sitting there, still carrying the load on his back. “Why are you still carrying your load? Put it down in the wagon!” he says to him. The pauper replies, “Dear sir, you have been so kind to offer me a ride. I cannot possibly impose upon you to ask you to carry my heavy load as well.”

As Yom Kippur approaches, the difficult task of thinking about the concrete realities of sin can help us think about the concrete ways to do teshuvaand to move forward. Let us do the work that we need to cleanse ourselves and to remove the impact of our past harmful actions from the world. And once we have done that, let us learn to remove the weight from our shoulders, to turn to God who is nosei avon, to trust in God’s promise that we will be forgiven so finally we can learn to forgive ourselves. 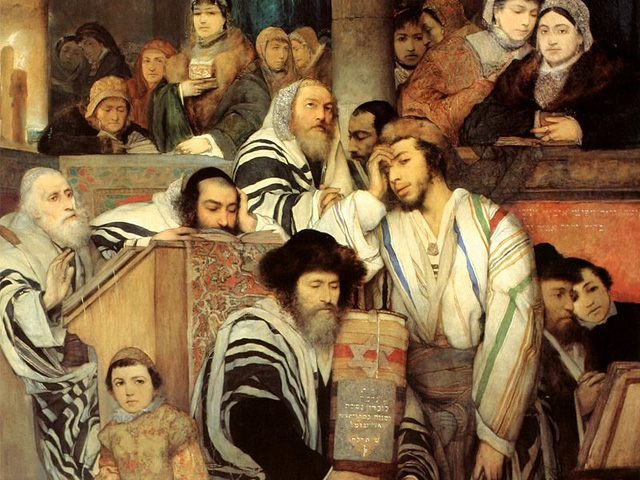 Time to Build the Sukkah!