“The priest shall bring it all, and burn it upon the altar: it is a burnt sacrifice, an offering made by fire, a sweet savor unto the Lord” (Vayikra, 1:13). We are told eight times in this week’s parasha that the sacrifices are a “sweet savor” to God. This graphic anthropomorphism of God is challenging to modern ears, but we can understand the power that it held for people in the past. It communicates the idea that our sacrifices rise up to God: the smoke rises to heaven, bringing with it the smell of the burning meat, and God is pleased by our offering. The message is clear: God desires our sacrifices.

Rambam believed otherwise. He was bothered by the institution of sacrifice and claimed that God only commanded it as a concession to human weakness. In his Guide to the Perplexed, Rambam suggests that God used sacrifices as a way of weaning the people off idolatry (III:32). As the method of worship for all the pagan gods, sacrifice was the only form of worship the people of the time could conceive of; they would not have been able to worship God solely through prayer. Thus, God moved them away from idolatry and commanded that they redirect their worship – with sacrifices – to God. God may have desired sacrifices as a temporary concession, but God certainly does not desire the practice as an ideal form of religious worship.

Ramban rejects Rambam’s position, pointing out that sacrifices were used to worship God even in situations free from a context of idolatry. Indeed, Kayin and Hevel offered sacrifices that were acceptable and pleasing to God, as did Noah. Furthermore, Ramban states that it is religiously offensive to suggest that the entire institution of sacrifice was not God’s true will:

His [Rambam’s] statements are preposterous. They “heal the great hurt superficially” and render “the table of the Lord disgusting” by limiting its use to placate the wicked and the foolish. But the Torah states that they are “…a sweet savor” (commentary on Vayikra, 1:9).

This debate – and the significance of sacrifices as a “sweet savor” – becomes central in the context of Pesach: Should we still bring a korban Pesach today? Starting with the Hatam Sofer (19th century, Hungary), there have been those who have argued for continuing the practice, even in the absence of a Temple. Putting aside questions of politics and practicality, is such a thing even halakhicallypossible?

On the one hand, one could argue that we are all considered temei met, impure due to contact with a corpse. We recently read Parshat Parah, named after the special maftir from Bamidbar 19 detailing the laws of impurity of corpses and the purification ritual involving the ashes of a red heifer. This reading reminds us how the people had to purify themselves in order to bring the Pesach sacrifice. But this is not an obstacle today. Given that we are all impure, we could bring the sacrifice regardless, based on the principle of tumah hutra bi’tzibbur, communal impurity is set aside for communal sacrifices.

But what about the absence of the Temple? This also need not be a halakhicbarrier. The Gemara in Megilah (10a) states that the original kedusha, the sanctity, of Jerusalem and the Temple from the time of Joshua remains today. Rambam rules this way, explaining that the kedusha of the Temple and Jerusalem never departed, for once God’s Presence rests in a place it remains there for all eternity (Laws of the Temple, 6:14-16). One might argue that this does not sufficiently address the lack of a physical Temple, but the Gemara Megilah (10a) also says “makrivim af al pi she’eyn bayit,” “one can offer sacrifices even without a Temple.” Rambam also rules in accordance with this.

So, even though we are ritually impure and without a Temple, it would seem that we could still offer sacrifices. (And the priestly garments could be easily manufactured – there is an institute in Israel that has already done so!) This position was argued by Hatam Sofer in a responsum, but for him the discussion was merely theoretical (YD 2:236). In the following generation, his student, Rav Tzvi Hirsch Kalisher, tried to make the theory a reality.

Rav Kalisher wrote an entire book, Drishat Tzion, arguing for the obligation to bring the korban Pesach. In writing the book, he hoped to put the bringing of the korban Pesach at the top of the communal agenda. Rav Kalisher’s initiative and his motivation for it can be better understood in a larger historical context. He began it when the Reform movement was just starting. The rejection of both the significance of the Land of Israel and the concept of shivat Tziyon, the return to the Land of Israel, was high on the agenda of the budding Reform movement, and the repudiation of the whole institution of sacrifices went hand-in-hand with this. It was thus important for Rav Kalisher to reassert the centrality of the Land of Israel, the Temple, and the sacrifices.

In hopes of getting other rabbis to sign on to his initiative, Rav Kalisher sent his book to Rav Yaakov Ettlinger, a staunch opponent of the Reform movement in Altona, Germany, for approval. Rav Ettlinger did not sign on. Instead, he offered a surprising counter-text to the passage in the Talmud allowing one to bring sacrifices without a Temple, and his response brings us back to the phrase, “a pleasing smell” (Teshuvot Binyan Tzion 1).

Rav Ettlinger quotes a Biblical verse at the end of Vayikra that prophesizes the destruction of the Temple. That verse states: “And I will lay waste to your Sanctuaries, and I will not smell the sweet savor of the sacrifices” (Vayikra, 26:31). According to Rav Ettlinger, this verse is telling us that, although the Sanctuary retains its sanctity even after its destruction, and one can technically still bring sacrifices, God declares that God no longer desires such sacrifices, that they will not be considered li’rayach nichoach, as a sweet savor. And it is a halakhic principle that a sacrifice that is not considered to be for a sweet savor is invalid. In an astounding move in the context of a halakhic, Torah she’b’al Peh argument, Rav Ettlinger states that, “although the Talmud says that one can still bring sacrifices, God states: ‘I will not smell their sweet savor.'” God trumps the Talmud!

But what about the statement that sacrifices can still be brought? This, answers Rav Ettlinger, is only when God is no longer “laying waste to the Sanctuary.” At any time in which the Temple is being actively rebuilt but has not yet been completed – such as the beginning of the Second Commonwealth or as will be in Messianic times – one can bring sacrifices without a Temple. But as long as the Temple is laid waste, then God is telling us that God does not want our sacrifices.

Rav Ettlinger’s approach is of great importance. It speaks to how we deal – theologically and practically – not only with the destruction of the Temple, but with other historical developments that the Jewish people have had to face. He argues that God sends us messages through historical events, and in our responses, we should not try to recreate previous realities in today’s world. Rather, we should respond in a manner appropriate to the context of contemporary realities.

The question of how to respond to the destruction of the Temple, and along with it the corresponding transition to a Judaism in which prayer and Torah learning are the central forms of worship, is actually debated in Hazal. There are those that see our contemporary forms of worship as mere substitutes for a more ideal, sacrificial order – “nishalma parim si’fateinu,” “let our lips be a substitute for oxen” (Hoshea, 14:3) – and there are those who state that prayer and Torah are greater than sacrifice. The latter approach can be seen in a verse from Tehillim, a verse that follows the opening of the Shemoneh Esrei itself: “God, open up my lips, and let my mouth speak of Your praise. For You do not desire a sacrifice, that I should give it. A burnt offering you do not want” (Tehilim, 51:16-17).

As we approach Pesach and prepare to celebrate the seder with all its rituals, we can reflect on the meaning of the seder night and how it has transformed from the time when we had a Temple and the entire people gathered together to sacrifice and eat the Paschal lamb. While our sedarim are certainly less bloody, and while we may believe as Rav Ettlinger did that such sacrifices are no longer desired, we can still be saddened by the loss of the sweet savor that came from a truly communal, nationwide celebration of the chag of Pesach. Without sacrifices, it is up to us to identify how our worship, on the seder night and throughout the year, can bring us together as a people and connect us to God, so that it may rise up and be received by God as a sweet savor.

Rabbi Dov Linzer is the President and Rosh HaYeshiva of Yeshivat Chovevei Torah Rabbinical School, and primary architect of its groundbreaking curriculum of Torah, Halakha, pastoral counseling, and professional training. Rabbi Linzer continues to be a leading rabbinic voice in the Modern Orthodox community through his highly popular podcasts, including Joy of Text and Iggros Moshe A to Z, and daf yomi shiurim covering all of shas. Rabbi Linzer has published many Torah articles, writes a widely read weekly parsha sheet, authors teshuvot on a wide range of contemporary halakhic topics, teaches regular Talmud and Halakha classes, and serves as a religious guide to the yeshiva’s students and 135+ rabbis serving in the field. 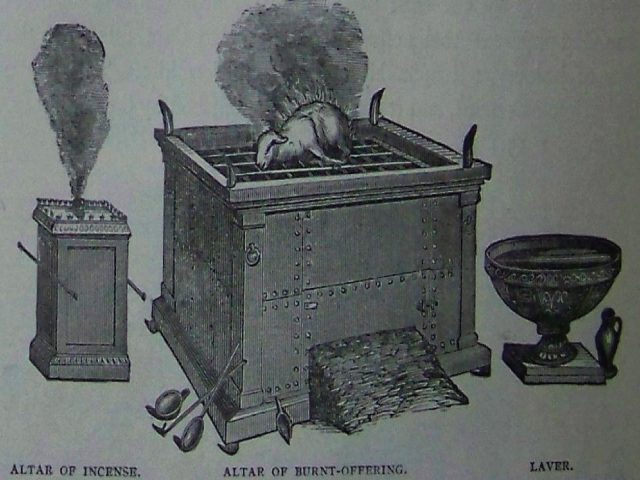 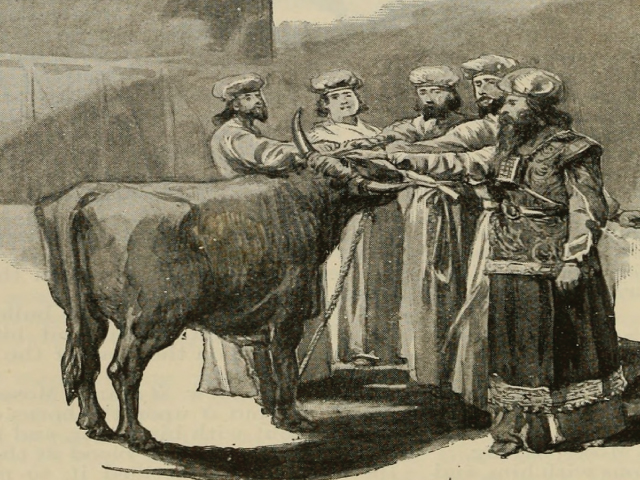 Tzav and Vayikra – Some Additional Thoughts