You are here: Home » Torah » A Leadership of Faith, Not Fear

A Leadership of Faith, Not Fear

Parashat Shelach is as much a story of leaders as of the people. It is a story of leaders both poor and good. The poor leaders-ten of the twelve spies-saw the challenges that confronted them in the land of Canaan and ran: “We are not able to go up against the people; for they are stronger than we” (Bamidbar, 13:31). The good leaders-Yehoshua and Calev-saw the same challenges and pushed forward: “Let us go up at once, and possess it; for we are well able to overcome it” (13:30). What accounts for this difference?

The simple answer is fear. When a person is afraid, all he or she can see is the object of his or her fear. Even for those who had seen all the miracles, who have all the reasons to believe in God, faith faltered when they were confronted with fear. The people had seen the hand of God in Egypt, at Har Sinai, and in the Wilderness, and still here, they were unable to believe that God would save them. Their reaction was the same as the people’s reaction at the Red Sea. The people prefer to go back and be slaves in Egypt or to stay in the Wilderness rather than confront their fears. Fear is irrational; it paralyzes.

The answer to fear is faith. Where fear sees only obstacles, faith sees opportunities: “We are able to overcome it!” This is what separates good leadership from bad. Leadership based on fear is no leadership at all. Good leadership must be based on faith in God and Torah, faith in others and in one’s self. Only leadership of faith could take the people into the Promised Land.

This is one of the things that distinguishes Modern Orthodoxy. Orthodoxy has in many ways become a religion of fear: fear of the outside world, of asking hard questions, of delegitimization, and of being honest with ourselves about our own shortcomings. It is much safer, some say, to reject the outside world, protecting ourselves in a cloistered environment.

There is much to be afraid of in the unknown, outside world. What will happen if we confront postmodernism, archeology, science, history, philosophy, academic Talmud, Biblical criticism, feminism, and homosexuality? What will happen-how might the world judge us-if we confront spousal abuse, rabbinic sexual abuse, alcoholism, and drug abuse? What will happen if we genuinely address the marginalization of single mothers, converts, the developmentally disabled, those suffering from depression, and children with special needs? Many in the Orthodox community have chosen to look at these challenges and say, “We cannot go up, for they are stronger than we!” The response is to put up walls and to remain in the desert.

But there is more than fear of the outside world. There is fear of losing full control, of granting the people a degree of autonomy. It is scary for some to imagine individuals and communities-or even local rabbis-thinking for themselves. For some, the answer to this is to have communal issues decided by a Gadol and his da’as Torah, to say: “Is it not better for us to return to Egypt? Perhaps we were slaves in Egypt, but everything was secure and predictable. In Egypt, someone else did the thinking for us.” This is leadership of fear, a yiddishkeit destined to stay in the desert and never go into the Promised Land.

Calev was a different kind of leader with a ruach acheret, a different spirit. He saw the formidable challenges and most certainly experienced fear, but he did not give into it. He responded to his fear by reaffirming his faith, and we must do the same. We must trust in God. We must trust in the Torah and its ability to confront life’s challenges. We must trust that it can be taken out of its shell and brought to bear on theological struggles, the economy, and injustice. We need to have enough faith in the Torah that we can honestly face up to the challenges of agunah, homosexuality, universalism, and particularism. We need to trust that it can help us embrace archeology, science, history, and feminism rather than rejecting them, allowing us to see a larger and deeper truth.

We also need religious leaders who trust in the people as well as the Torah. We need leaders who do not withhold information or misrepresent halakha out of a false belief that the people can’t handle the truth, leaders who value the expertise and the voice of every member of the community, respecting them and including their voices in its piskei halakha and its decision-making process.

Leadership and a Torah based on faith, not fear, will be open to hearing other voices, even those in opposition. The natural response is to try to shut these voices down, as even Yehoshua did when Eldad and Meidad were prophesying in the camp: “My master, Moshe, restrain them.” It requires a great leader to resist this response, to recognize that we as a people will only be richer and wiser if we can listen to and respect visions that are different from our own. It is a rare leader who has enough faith in himself that he can welcome challenge.

What we most desperately need are religious leaders who have enough faith in the people, whose deepest desire is not to lead the people but to empower them. Such leaders know that they will only truly succeed when they have inspired each individual to find his or her unique vision and follow it, not when everyone conforms to their vision. We need leaders who can say, “Who would give that all the nation of God would be prophets, that God should give God’s spirit upon them!” We need leaders who will take us into the Promised Land. 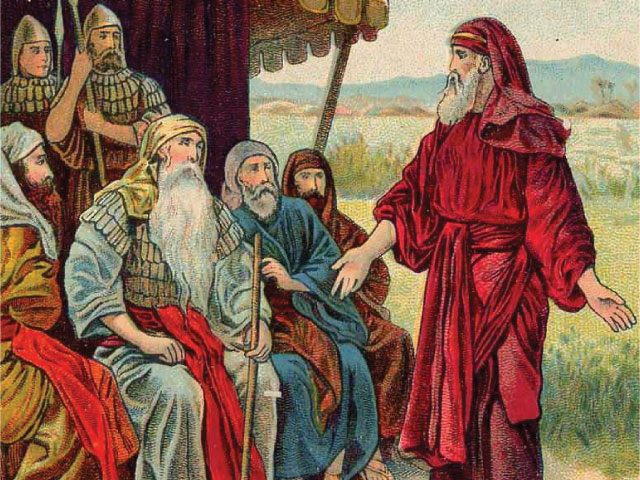