You are here: Home » Torah » Passionate Judaism or Rational Judaism?

Do we want a religion of fire or ice, of passionate religious fervor or sober, detached rationality? In many ways, Modern Orthodoxy has chosen the latter. This goes beyond an emphasis on the intellectual, on prizing Talmudic scholarship and broad academic achievement. It also entails devaluing the emotional in religious life, diminishing the place of piety and deep religious belief. It is the talmid chacham who is prized and praised. The chasid and the yarei shamayim? Not so much. Just compare the normal davening in a Modern Orthodox shul to that in a yeshivish or charedi one. Where is our passion, our fire, our hitlahavut?

But religious passion can be dangerous. It can lead to extremism, self-righteous certainty, and even zealotry and violence. In the era of Al-Qaeda and ISIS we are only too familiar with the murderous realities that can be born of a religious passion left untempered by doubt, humility, critical reflection, or any sense of morality.

Perhaps then the question is not which is better, but which is worse. Robert Frost captured this quandary, in a slightly different form, in his famous poem, “Fire and Ice”:

Some say the world will end in fire,
Some say in ice.
From what I’ve tasted of desire
I hold with those who favor fire.
But if it had to perish twice,
I think I know enough of hate
To say that for destruction ice
Is also great
And would suffice.

A religion of fire can burn and destroy; a religion of ice can leaves its adherents cold and empty. We need to move away from this either/or formulation and find the elusive possibility to embrace both.

Consider how we approach the akeida. The akeida presents a profound challenge to the contemporary reader. Avraham listens to God and almost sacrifices Yitzchak. Is the message, then, that we should be prepared to listen to God’s command even when God tells us to murder the innocent? There are some who will unhesitatingly answer, “Yes. The test of true faith is following our religion even when its demands seem to violate our sense of morality.” There are others who will answer no, saying that Avraham failed the test by listening to God. This is an undoubtedly difficult reading of the Biblical verses, but one hears this interpretation more and more these days.

Both of these answers are too simple. Each one chooses one side of the either/or divide. But if the matter had been that straightforward, what would have been the point? When God told Avraham to sacrifice Yitzchak, Avraham had two obvious choices: (1) He could have said, “Absolutely, no problem. God, whatever You say goes.” Or (2) he could have said, “Sorry, God, that’s murder. I’m not doing it.” If Avraham would have chosen either of those two choices, he would have failed. Avraham’s religiosity would not let him choose the second and his morality would not let him choose the first. Avraham’s greatness was that he recognized this command as impossible, that he grappled between his religious fervor and his knowledge of right and wrong until the last possible moment.

The following story from Brieshit Rabbah illustrates this point:

Samael (a tempting angel) [went] to our father Avraham, and said to him: “What, old man, have you lost your mind? A son given to you after 100 years, you are going to slaughter him?”

Avraham responded, “Even so.

He said to him, “And if God demanded more from you, would you submit?”

He responded, “No matter how much.”

Samael said to him, “Tomorrow they will say that you are a spiller of blood and you are liable [for having committed murder].”

He responded, “Even so.”

As Nehama Leibowitz has pointed out, this midrash is best understood as an external expression of the inner struggle Avraham experienced. Samael is none other than Avraham’s own questioning voice. How much, Avraham asks himself, is he prepared to do to submit to God’s command? Is he prepared to be perceived as, or perhaps in fact be, a murderer? Avraham’s moral self is yelling, “No! You can’t do this!” His religious self yells back, “Even so!” This “even so” does not deny the legitimacy of the other voice; it pushes on regardless. But because the voice is not denied, it never goes away.

Avraham’s journey to the mountain takes place in complete silence. He does not argue with God because he knows he is being tested. Why else would God ask for such a horrific thing? He is silent on the outside, but a battle rages within. He is not arguing with God because he is too busy arguing with himself. Should he do it? How can he do it? How can he not? And as he struggles, he pushes forward, every hour getting that much closer to the mountain, that much closer to the moment of the ultimate decision.

It is possible to see this struggle in the few words that Avraham speaks before the akeida. He tells his two attendants that he and Yitzchak will prostrate themselves and return. We are accustomed to reading this as a fib told to them to alleviate their worry, but what if Avraham believes it to be true? What if his morality and his belief in God’s goodness lead him to believe that God will never demand this of him in the end, that this will not be about sacrifice, that it will be nothing more than an act of worship and that somehow, in some way, both he and Yitzchak will return?

Søren Kierkegaard makes the same point regarding Avraham’s response to Yitzchak that God will find the sheep. We normally assume that Avraham is either putting Yitzchak off or hinting to that he will be the sheep. But what if Avraham really means it? Here’s what Kierkegaard writes:

….but in the next place, he makes the movement of faith every instant. This is his comfort, for he says: “But yet this will not come to pass….” Isaac asks Abraham where the lamb is for the burnt offering. “And Abraham said, God will provide Himself the lamb for the burnt offering, my son.” (Fear and Trembling, ch. 5)

Consider, in contrast, the picture of religious passion that Rashi draws:

“Do not cast your hand against the lad”—to slaughter him. Said Avraham to him, “If so, then I have come here for naught. Let me at least wound him and draw some blood.” The angel responded, “Do not do aught to him” — do not even make a wound.

For Rashi, Avraham was so eager to fulfill God’s command that he wanted to find some way of sacrificing Yitzchak even after the angel stopped him. Rashi explains what Avraham was thinking when he offered the ram:

“[He offered it as a burnt offering] in place of his son”….for every sacrificial act he performed on the ram, Avraham prayed and said, “Let this be as if it were done to my son. As if my son were slaughtered, as if his blood was cast on the altar, as if he were flayed, as if he were burnt up and turned to ashes.”

According to this explanation, Avraham needed to find a way to offer Yitzchak even after the angel had told him not to. He could not take no for an answer. He was all fire and no ice.

Thankfully, we are not tested with an akeida. Our test today is whether we can learn the lesson of the akeida. Can we learn the moral dangers of unbridled religious passion and the religious dangers of cool dispassionate rationality? Can we have a religious life that is informed by our morality and a moral and intellectual life that is God-oriented, God-connected?

Without [the akeida], humanity would have continued to relate to the divine either savagely and wildly, through powerfully pulsating emotions, or with a cool disposition and reservedness lacking the characteristics of a profound life…. Came “the father of many nations” and taught what had to be taught….And the binding of Isaac is mercifully remembered for his children forever and ever. 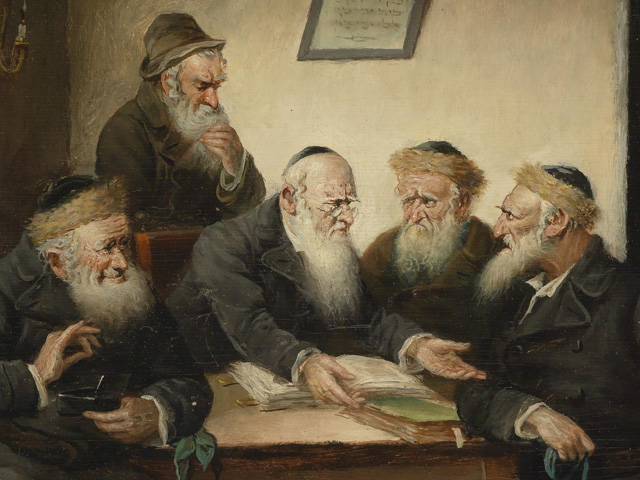