Was Rivka a (Gasp!) Feminist?

When Avraham charges his servant to find a wife for Yitzchak, the servant asks a strange question: “Perhaps the woman will not desire to follow me to this land. Should I return your son to the land which you came from?” (Breishit, 24:5). The servant’s concern that the woman might resist is unexpected. Laws appearing later in the Torah make it clear that a father controls and speaks for his daughter, but here, the father and his possible refusal to give his daughter is not an issue. The possibility that Yitzchak will be asked to go live with his wife is also considered. This is quite strange, as normally the woman would have been taken into the husband’s home. Certainly there must have been exceptions, but the more natural question would have been: “If she refuses, can I then find a wife from somewhere else?” It seems that Avraham’s servant knew something about this particular society that shaped his concerns, focused as they were on how the woman would act and what she would demand.

Questions of the place of women in Aram society come up again when the servant arrives there and interacts with Rivka and her family. After Rivka passes his test by offering water for him and his camels, the servant asks her, “Whose daughter are you?” She responds, “I am the daughter of Betuel, who is the son of Milkah, whom she bore to Nachor.” This manner of familial identification is a departure from the norm. A classic example of identification by father can be found at the beginning of next week’s parasha: “These are the generations of Yitzchak the son of Avraham, Avraham begat Yitzchak” (25:19). Following this, Rivka’s answer would have been, “I am the daughter of Betuel, the son of Nachor.” What is Milkah’s name doing here?

Milkah actually showed up at the end of Vayeira, the previous parasha. “After these things it was told to Avraham saying, behold Milkah has given birth to Nachor your brother” (22:20). Notice again the unusual focus on the mother. It seems that the family structure is different in Aram Naharaim. This society is not a patriarchy, where a child is identified through his or her father and genealogies come in the form of father-son, father-son. Aram Naharaim seems to be a matriarchy, a society in which the family structure is defined by the mother. (I owe this insight to Nancy Jay’s book, Throughout Your Generations Forever: Sacrifice, Religion, and Paternity.)

A matriarchal society is not necessarily one in which mothers hold political power. In fact, there is doubt as to whether a society has ever existed in which women are the holders of political power. Rather, a matriarchal society is one in which family lines are defined by matrilineal descent, one in which women do, as a result, have more rights and a greater voice. The benefit of this structure is obvious: In such societies, the question of the identity of a person’s father – which can always be in doubt – was nullified. It was the identity of the mother that mattered, and this was always known. The head of the household would not be the (presumed) father but the mother’s brother or her oldest son. Thus, while a man was at the head, the matriarchal structure removed the anxiety around paternity that existed in patriarchal societies. Consider Rashi’s comment on the verse, “Avraham begat Yitzchak”: “Since the mockers of the generation were saying that Sarah had been impregnated by Avimelekh….God formed Yitzchak’s facial appearance to be similar to Avraham’s, so that all could testify that Avraham had sired Yitzchak” (25:19).

We can now understand why Rivka identifies herself as the granddaughter of Milkah. However, when the servant repeats the story, he reframes Rivka’s answer in his own cultural norms: “And she said, ‘I am the daughter of Betuel the son of Nachor, whom Milkah bore to him'” (24:47). While Rivka said that Betuel was the “son of Milkah,” in the servant’s version he is the “son of Nachor,” just as he would be described in a patriarchal society.

Similarly, the servant asks Rivka, “Does your father’s house have a place for us to stay?” (24:24). What is Rivka’s response? “And she said to him, ‘We have much straw and fodder, and also a place to sleep'” (24:25). For Rivka, there was no “father’s house”; in her society the father was simply not in the picture. Thus, when Rivka leaves the servant we read, “And the young woman ran and she told her mother’s household according to these events” (24:28). This is perhaps the most revealing verse of all. Rashi notes how unusual it is to refer to a “mother’s household” and resolves this problem by interpreting the phrase to mean a physical house or room that a mother had to herself, saying that Rivka ran to such a place to confide these events to her mother. There is no question, however, that the simple sense of the verse is that it was her mother’s household; the mother, not the father, was at the head of, or defined, the household.

In fact, Rivka’s father, Betuel, is quite invisible in this entire episode. It is not Betuel who greets the servant but Lavan, Rivka’s brother. And when the servant completes his story, we read that “Lavan and Betuel responded, ‘From God has this matter come!'” (24:50). Why is Lavan, the brother, mentioned before Betuel, the father? In this society, the brother and mother head the family, not the father. And thus, the servant gives gifts not to the father, but to Rivka’s “brother and mother” (24:53).

It thus comes as no surprise that the father is nowhere to be found when the final decision is made: “And her brother and her mother said, ‘Let the lass stay with us a year or ten months” (24:55). Rashi, assuming the norms of a patriarchal society, asks, “And where was Betuel?” His answer: “Betuel wanted to refuse to give Rivka and an angel came and smote him dead.” As we have seen, this question disappears once we realize that we are dealing with a matriarchal society. This is also why Lavan and Rivka’s mother send Rivka away and bless her, referring to her as “sister” and not daughter (24:59-60). With Lavan as the head of the family, Rivka is the family’s sister, not its daughter.

Returning now to the beginning of the parasha, we can understand why Avraham’s servant was concerned that the woman would stay put and Yitzchak would be asked to relocate, and why he was concerned about what the woman, and not her father, would say. For in matriarchal societies, the husband would move into the woman’s house and women had a voice regarding their fate. And, lo and behold, we find that unlike cases in which a father marries off his daughter unilaterally, here, when the critical moment comes, the final decision is given to Rivka. “And they said: Let us call the lass, and ask for her answer” (24:57). In fact, this is a value that finds its way into halakha. It is from this that the Sages learn that a father is forbidden to marry off his underage daughter, that he must wait until she is an adult and can choose her own husband (Rashi and Nachalat Yaakov, Breishit, 24:57 and Kiddushin 41a).

Perhaps this helps explain why Avraham was so insistent on the servant going to Aram. Maybe Avraham wanted to make sure that Yitzchak’s wife would be a woman who had a voice of her own. Avraham had learned this lesson well: “Everything that Sarah tells you, listen to her voice” (21:12). Sarah, also from Aram, did what was necessary to ensure the survival of her family. And for this family, this new religion, to succeed, it would require not just strong men, but strong women as well. It would require women like Sarah and Rivka. For as we will read in next week’s parasha, it was Rivka who, using her strength and her voice and finding a way to operate in a patriarchal society, followed in Sarah’s ways and acted to ensure the continuity of the Jewish family.

It is unhealthy to have only men in positions of power. We need to learn to follow Avraham’s example, to seek out strong women, to seek out women’s voices, to be led collaboratively by men and women working to ensure our survival as a people who will sanctify God’s name in the world. 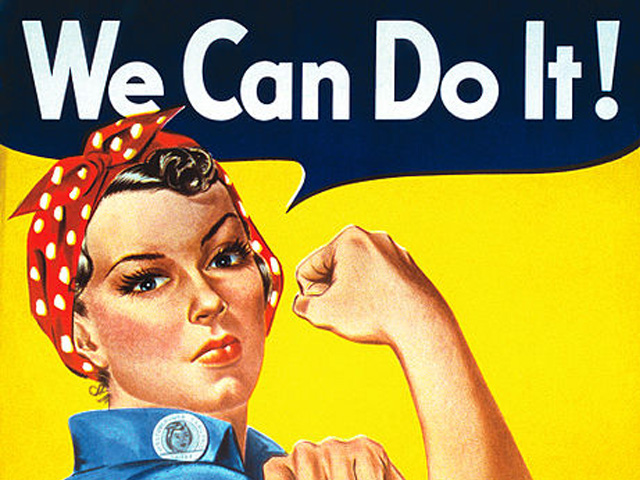