This article was originally published on My Jewish Learning.

In the traditional wedding ceremony, men play a more prominent role than women. This can be troubling for couples who, while wishing to be respectful of tradition and community, are also looking for ways to have a ceremony that reflects their vision of marriage as an equal partnership. In this article, I will discuss some opportunities that exist within halakhah [Jewish law] for creating a more balanced wedding ceremony.

As with any area of halakhah, there is a range of opinions, and these issues need to be discussed with the couple’s officiating rabbi. Beyond halakhah, tradition plays an important role in linking an individual to his or her community and to previous generations. Couples should work to achieve not only an appropriate balance between the sexes, but also the appropriate balance between tradition and innovation as well.

The wedding ceremony usually begins with a chatan’s tisch, the groom’s reception, at which certain documents are signed and the groom generally offers a d’var Torah. To create greater balance, the kallah [bride] can hold a tisch of her own. The kallah’s tisch can be as simple as the kallah and her friends and family singing and sharing good wishes. It can also be an opportunity for the kallah or a friend to deliver a d’var Torah.

The tisch is followed by the chatan walking amidst dancing and singing to the kallah, where he performs the act of bedeken, or lowering the veil over the kallah’s face. Couples who would like to make this ceremony more reciprocal may choose to incorporate a parallel act in which the kallah places a new tallit [prayer shawl] on the chatan.

After the badeken, the chatan and kallah walk with their parents to the huppah [canopy]. The couple may wish to adopt the practice where the chatan leaves the huppah, greets the kallah midway down the aisle, and the two of them then walk together to the huppah.

In many Ashkenazic communities the common practice today is for the kallah to make seven circuits around the chatan. This is not practiced at all in Sephardic communities. A couple can choose to forgo these circuits or add circuits of the chatan around the kallah. Other variations are possible. Recently, I attended a wedding where the chatan and kallah separately circled the empty space under the huppah, as a way of consecrating it as their space, and then entered the huppah together.

The Giving of the Ring

The act of kiddushin [bethrothal] consists of the groom giving a ring to the bride in front of witnesses and saying: “Harei at mekudeshet li…” (“Behold, you are betrothed to me…”). Traditionally, the bride’s role is limited to silently accepting the ring. The bride who wishes to play more of an active role may do so in a number of ways:

• The chatan may address the kallah using her name: “Rivka, harei at mekudeshet li…“–”Rivka, behold, you are betrothed to me…” This can have a profound personalizing effect.

• The groom may ask for the bride’s permission to perform the kiddushin, indicating her participatory role in the kiddushin: “Rivka, bershutekh u’virtzonekh, harei at mekudeshet…“—“Rivka, with your permission and desire, behold you are betrothed to me…”

• Provided the groom first makes his requisite statement, the bride can respond by verbally accepting the ring, with language such as, “Herieni mekabelet taba’at zu u’mekudeshet lekha k’dat Moshe v’Yisrael …”–”Behold I accept this ring and am betrothed unto you, according to the law of Moses and Israel.” (See Kiddushin 12b, Shulhan Arukh, Even Ha’Ezer, 27:8 and Otzar Haposkim, ad. loc. See also Hanesuim K’Hilkhatam, 7:39, pp. 223-4, where the author indicates that verbal acceptance is preferable to implicit silent  acceptance.)

Beyond these relatively minor adjustments to the kiddushin, a growing number of couples would like to have an actual exchange of rings. While a one-for-one exchange raises halakhic problems, there are ways to do a double ring ceremony within the bounds of tradition.

The ketubah is traditionally read between the giving of the ring and the sheva berakhot (seven wedding blessings). A woman can be honored with the reading of the ketubah, and this has already been done at a number of Orthodox weddings.

• Use of mother’s names following father’s name (e.g., Ya’akov ben Yitzhak v’Rivka). This is a more precise identification, and is no different than the use of family names.

•Betulta, “virgin.” It is currently the practice to use this description for the woman’s first wedding, regardless of her personal status. This description is not essential and may be totally eliminated or replaced with a generic phrase such as L’kalah hayikarah (to the dear bride).[2](It should be noted that the absence of the word “betulta” may raise questions in the future as to whether this was a first wedding for the bride. This would be a concern if she becomes widowed from this marriage and then wishes to marry a kohen, who is not allowed to marry a divorcee. Based on similar considerations, if the woman has been divorced there needs to be some textual indication in the ketubah as to her personal status.)

Beyond these minor adjustments, there is the possibility of adding additional stipulations in appropriate places in the ketubah as is the practice in Sephardic communities. The groom can insert a statement that he will not take a second wife or divorce his wife against her will. This space can also be used to insert phrases of mutual love, support, and commitment. Of course, any new language needs to be carefully reviewed by a competent halakhic authority.

For couples who are disturbed by the unequal nature of the financial obligations in the ketubah, additional modifications are possible. For its time, the ketubah was quite progressive, ensuring that the wife was treated as a person and was provided for during and after the marriage. The Rabbis, through the ketubah, obligated the husband to pay specific sums if he divorced (or predeceased) her, thus ensuring that a husband did not treat his wife as property, to be disposed of at will.[3]

The ketubah also protected the wife’s interests by requiring the husband to provide her with lodging, clothes, and food, in exchange for which he is entitled to her earnings. However, these ongoing obligations may be modified, and a marriage contract that speaks of shared earnings and shared financial responsibilities is indeed possible within halakhah.

The halakhah states that since the husband’s obligations were instituted for the benefit of the woman, the woman is entitled to waive them. (See Ketubot 58b, and Shulkhan Arukh, Even Ha’Ezer, 69:4.) If they are waived, the wife would be entitled to her own earnings, and would be financially responsible only to herself, and the same would obtain for the husband. They could both then obligate themselves to share their earnings and to share the financial obligations of the household.

With the approval of recognized halakhic authorities, some Israeli rabbis have begun to attach riders to the ketubah that incorporate such stipulations. These stipulations have not been inserted into the ketubah itself, so as not to modify the traditional, central ketubah text.

Whether the language of the Shulkhan Arukh (Even Ha’Ezer 62:4-5) allows women to recite sheva berakhot is debated. The primary conceptual question is whether these blessings are the obligation of the groom or of the community. If they are the groom’s obligation, it is problematic for a woman, who is never obligated in these blessings, to make them on behalf of the groom. (It is easier, if not unproblematic, to understand  how another man might make a blessing for the groom, since he is at least someone who might become or has already been obligated in its recital.)

If it is the community’s obligation, a woman may be able to make the blessings.

It seems clear that sheva berakhot during the meal are the community’s obligation, and there is a good basis to claim that they can be made by women. Rabbi Yehuda Herzl Henkin rules this way in principle (B’nei Banim III:27), and a number of Orthodox rabbis have begun to allow women to recite sheva berakhot at the meal.[4]

In contrast, there is also some reason to believe that the sheva berakhot under the huppah may be the obligation of the groom.[5]  These blessings, then, should be made by men.[6] Women can still participate by calling men and women in pairs for each blessing, with the man reciting the Hebrew text and the woman reciting an English translation.[7]

It is my hope that these suggestions will assist couples in creating a wedding ceremony that reflects their view of marriage as an equal partnership.  Couples should consider the carefully what changes they wish to incorporate, working with their officiating rabbi to address not only halakhic issues, but to determine the proper balance between innovation and tradition as well.

The marriage license in most cases cannot be signed until after the ceremony.  The prenuptial agreement currently used consists of two parts, the Groom’s Obligation and the Binding Arbitration.  The Groom’s Obligation has to be signed by the groom, and can take place at the chatan’s tisch or prior to the wedding.  The Binding Arbitration has to be signed by both parties.  The groom can sign his part prior to the wedding or at the chatan’s tisch, and the bride can sign her part at her tisch.  Both documents needs to witnessed and signed by the witnesses, and should be notarized as well.

See Ketubot 11a, and P’nei Yehoshua to Ketubot 39b. For a full treatment, see Judith Hauptman, Rereading the Rabbis: A Woman’s Voice, pp. 62-68.

See Rambam Hilkhot Ishut 10:3-6 regarding the blessings under the chuppah and Hilkhot Berakhot 2:9-11 regarding the blessings at the meal.  In particular, note the emphasis of personal obligation on the groom and the use of the singular verb, miv’arekh, in Ishut 10:6, and the exclusion of slaves and minors only in reference to the minyan (Ishut 10:5).  Contrast this to statements in Berkhot 2:10 that those who are gathered make the blessing (and the use of plural verb, mevarkhim) and the need to exclude slaves and minors from those qualified to make the blessing (Berakhot 2:9). to the  further discussion, see R. Azarya Berezon, ברכת חתנים, תחומין, ו (תשמ”ה), pp. 101-117.

The fact that a woman who is serving as an agent for the groom can make the groom’s betrothal blessings (see Rambam, Ishut, 3:17 and 3:23), is not relevant to this point.

The English translation would not be considered a brakha li’’vatala, see Iggrot Moshe, Orah Hayim, 2:49. 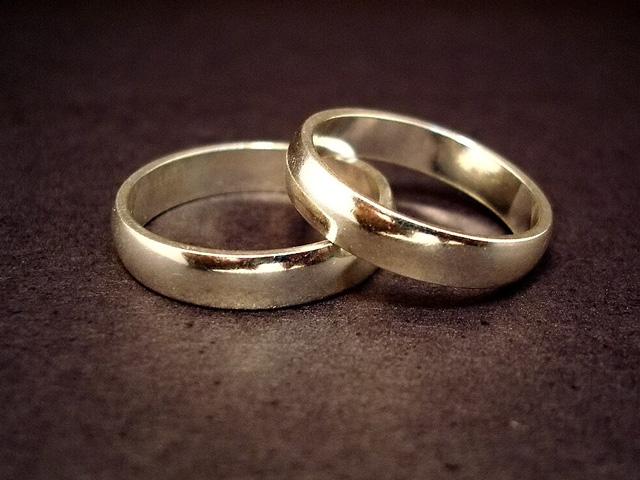