You are here: Home » Torah » Sefer Devarim » Nitzavim » To Lead, Perchance to Dream

To Lead, Perchance to Dream

The people about to enter the Land of Israel are different than those who left Egypt a generation earlier. These people were born free from slavery and can face the future without fear. They have forged a deep and lasting relationship with God over forty years in the wilderness. And they have become an am, individuals whose shared travels and travails, their shared past and future, have forged them into a single people. As Moshe tells them time and again, “It is this day that you have become a people to the Lord your God” (27:9, and see 26:18, 29:12). They are a people who are about to enter the land and become a nation.

Appreciating this transformation is key to understanding why the covenant forged at Mount Sinai must be repeated before they enter the land. As Parashat Nitzavim opens, we are told that the people have all been gathered “to enter into the covenant of the Lord your God.” Earlier, the Torah tells us that this covenant is additional to the one made at Mount Sinai (28:69). Why make the same covenant a second time? Because the first was made with a loose collection of individuals; the second would be made with a people and a soon-to-be nation.

A single people has a corporate, abstract identity which transcends the identities of the individuals who comprise it. Moshe thus declares that the covenant is being made

While Tanhuma explains this to mean that the souls of all future generations were present at that moment, the simple meaning of the verse is more straightforward: Just as a nation is bound by the treaties it makes after all those who signed them have passed away, so too, Moshe is saying, you are entering into this covenant not as individuals but as the Jewish people, and it will be binding on you as a people at all times.

This is why the Torah introduces the concept of areivut, the idea that we are responsible for the actions of others. One aspect of areivut is reflected in the well-known phrase “kol Yisrael areivim zeh ba’zeh,” “all of Israel are guarantors for one another” (Shavuot 39a). This indicates a personal obligation, that each person is responsible for every other person. A different dimension emerges from the opening section of our parasha, that of communal responsibility. Here we are told that if a person practices idolatry, thinking himself not bound by the covenant, the entire land will be devastated and the people sent into exile because “they have abandoned the covenant of God” (29:23). The nation is to be punished for the actions of individuals. If they had created a better society, if they had done more to ensure that everyone received proper religious and moral education, to create a fair and just legal system, to have religious and political leaders who were examples for the people, then no one would be writing themselves out of the covenant. The community as a whole is held responsible for falling short.

The second covenant differs from the first in other ways as well. At the sealing of the Sinaitic covenant in Parashat Bechukotai, the Torah spells out all the tragedies that will befall the people if they abandon God’s laws. At the end of the long litany of curses, the Torah concludes with a note of hope and reassurance: God will not abandon or reject us; he will remember the Exodus and the covenant with the forefathers and save us for their sake (Vayikra 26:45). In stark contrast, after the long descriptions of curses in last week’s parasha, there is no similar concluding verse; we are left with a bleak picture devoid of hope:

“And the Lord shall bring you into Egypt again with ships, by the way which I spoke to you that you shall see it no more. There you shall sell yourselves unto your enemies for slave men and women, but none will buy” (28:68).

Our forefathers are not mentioned here, and the Exodus from Egypt is now to be reversed: we will be taken from the Land of Israel and brought back to Egypt so despised that we will be worse than slaves, abandoned and forgotten. There will be no hope and nowhere to go. It will be—in all appearances—the end of our story as a people.

The difference between these endings is rooted in the different identities of the people. In the first covenant, the people are a loose collective. Indeed, in contrast to the later curses, those here refer to the people in the plural, indicating that they are not a single nation. As individuals, there is no collective history to reverse, just punishment and suffering for all. Their culpability is less, and so are the expectations for them. They are not yet a mature, empowered nation. The people have just reached the stage of being responsible for their individual actions; they certainly cannot be entrusted to protect the future of the nation. It is God, as a parent, who must step in and save them. This is what we do for our children. They will stumble and fall, and at times we will punish them, perhaps even harshly, but in the end, we will always be there for them. As Robert Frost put it, “Home is the place where, when you have to go there / They have to take you in.” God, and our relationship with God, is our home. It is a home founded by our forefathers and imbued with the warm nostalgic memories of the Exodus. When we have to go there, when our lives are at stake and we need refuge and protection, God will always take us in.

The second covenant tells a different story. In it, as a people and a nation, we are the custodians of our history, so if we fail, the covenant can be reversed and effectively wiped out. But we are also custodians of our future. We are not given safety nets and comforting reassurances; after tragedy upon tragedy, a time may come that looks like the end. At such a time, God will not save us by swooping in from above. Rather, we must take matters into our own hands.

This is the story told in our parasha: “And it will be when all these things befall you….and you will return to the Lord your God and listen to His voice” (30:1–2). More than the simple acknowledgement of sin necessary for God to take us back in Bechukotai, here we must have a true reversal of direction. It is an active returning to God, turning our lives around, returning to the land, and restoring our history. After we have changed course, God will follow suit: “And the Lord your God will return your captivity, and return and gather you from all the nations where the Lord your God has scattered you there” (30:3). We direct the course of events; our actions cause God to act.

Our future may have looked bleak when we were first left to ourselves, but when we are able to take charge of our future, we can grow to heights not previously imagined. Here, we are not saved on account of our forefathers. Rather, we are told that God “will do good to you and make you greater than your fathers” (30:5). The Yerushalmi (Shvi’it 6:1) states that this means the second sanctification of the Land of Israel in the time of Erza was more powerful and enduring than the first, in the time of Joshua. This is what true growing up is about: knowing that you can be as good your parents and, in some ways, even better. This can only happen on the national level once we have taken responsibility for ourselves as a people.

As Rosh HaShanah approaches, we derive comfort from knowing that no matter how far we stray, God will always take us back in. At the same time, we know that if we want to protect our personal past and shape our future, we must take charge of our own lives; we must not just confess our sins, but truly change our actions. If we want to chart our future as a people, we must own our communal responsibility, know that all of Klal Yisrael is part of the covenant, and know that it is up to us to create the type of society, and the type of future, that we want as a people.

This was the type of leadership exhibited by Shimon Peres in his seven decades of public service to the people and state of Israel.  He believed that it was necessary to dream, stating that to accept the status quo was to give up on Israel’s future.   Peres was that rare breed of leader, a statesman, not a politician, a man who thought about history, not the next election.  He knew what it meant to be a custodian of the people’s history and their future, and that one must always do what is right, not what is expedient.  In his words, “It’s better to be controversial for the right reasons, than to be popular for the wrong reasons.”  May his memory be for a blessing. 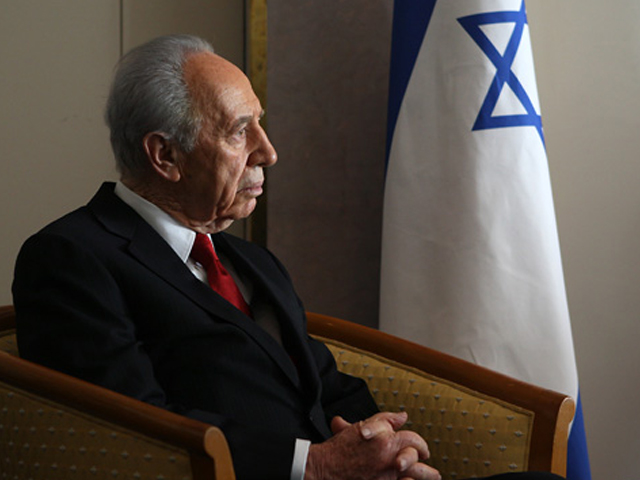