You are here: Home » Torah » Sefer Vayikra » Shemini » May My Toddler Drink Milk When She is Eating Meat or Is Treif Food Bad For Your Soul?

May My Toddler Drink Milk When She is Eating Meat or Is Treif Food Bad For Your Soul?

QUESTION:  My daughter recently turned one year old.  For children of her age, it is recommended that they consume 16 ounces of whole milk a day.  It is hard to get my daughter to drink milk when she is not eating.  May I still give her milk when we are having meat for dinner?

ANSWER:  As a general rule, a parent need not prevent her very young toddler from doing acts that would be halakhically prohibited as an adult.   There is an obligation of hinukh, educating and habituating our children to do mitzvot and observe the prohibitions (but see Tosafot Yeshanim, Yoma 82a, s.v. Ben).  However, this does not apply to children who are below the age where such training can impact their behavior (see Tosafot Shabbat 121a, s.v. Shema, SA OH 343, and Mishneh Brurah no. 3).  It would seem that there should be no problem in feeding meat and milk, or even non-kosher foods, to a one-year old child.

The matter is not so simple.  Two key issues must be addressed here, one halakhic and the other of a more metaphysical nature.

Let’s start with halakhah. The Talmud (Yevamot 113b-114b) addresses the question of whether beit din – a Jewish court, but in this context better understood as referring to the Jewish community as a whole – is obligated to intervene if they see a child eating neveilah, meat that has not been slaughtered properly.  In the course of its discussion, the Gemara cites the following braitta:

“You shall not eat them, for they are a detestable thing” (Lev. 11:42) –  [this can be read to say:] “you shall not feed them.” This verse obligates adults regarding children.

The braitta reads the prohibition against eating the meat of non-kosher animals to extend to feeding such meat to minors.   The end of the verse even gives a reason for this – “for they are a detestable thing.”  There is something inherently disgusting about such food, and everyone must keep away from it.

Parallel to this, the Talmud cites a braitta that obligates adult kohanim to ensure that male kohanim who are minors do not become tamei, ritually impure, and a mishnah that a parent must prevent her child from violating Shabbat because “his Shabbat rest is your responsibility.”  The common denominator of these cases is that we are dealing with acts whose performance would not just be a violation of a Torah commandment.  When Shabbat is broken by anyone, even a young child, the very sanctity of Shabbat is violated.  This is one of the reasons that the Torah states that Shabbat must be observed by “you, your son and your daughter, your male and female slaves, your beasts, and the stranger in your midst.” (Ex. 20:9).  The sanctity of Shabbat, both metaphysically and how it is experienced by the community, is protected and preserved only when everyone in the community – regardless of obligation, or even of being Jewish or human! – is observing it. A similar thing can be said of the sanctity of the kehunah.

In its conclusion, the Talmud reinterprets these texts and concludes that a third-party is not obligated to intervene if a minor is eating non-kosher food (or violating the Shabbat or the kehunah).  One may not, however, “directly feed him” non-kosher food.  In addition, as Rishonim clarify, a parent must stop his or her child from eating non-kosher food if the child is of the age of chinukh (SA OH 343:1).

While your daughter is under the age of chinukh, it would seem that there is still a problem in this case because one is not allowed to “directly feed the child” such food.  Does that apply here?

It does not.  Eating meat and milk together is not a Biblical violation so long as they have not been cooked together.  When dealing with food that is only rabbinically forbidden, Rashba (Yevamot 114a) rules that one may feed it directly to a young child.  In contrast, Rambam (Ma’akhalot Assurot 17:27) and Shulkhan Arukh (OH 343:1) rule that a child may not be fed rabbinically forbidden food. Nevertheless, it is generally agreed that such food may be given directly to the child if it is done so for the child’s benefit (Gra, s.v. vi’Afilu; MB  no. 3).  In our case, the milk is being given to the child for the sake of the child’s health.  Thus, as a matter of halakhah, it is permissible to give this small child milk to drink with her meat.

When it comes to non-kosher foods, however, halakhah is not the only thing that matters.  The Torah repeatedly refers to non-kosher foods as sheketz, an detestable thing, and warns us that we may not “make yourselves abominable with any creeping thing… that you shall be defiled thereby.” (Lev. 11:43).  These foods, the Torah seems to be saying, are intrinsically bad and will have a harmful impact on us.  It will be remembered that based on a similar verse, the Talmud suggested that a minor must be stopped from eating non-kosher food. Although that opinion was rejected as a matter of a halakhah, it does not fully disappear.

In explaining the reasons behind the laws of the kosher and non-kosher animals, many commentators, following the lead of the above verse, stated that the meat of such animals is indeed harmful to our bodies and/or our souls (Rambam, Moreh Nevukhim 3:48; Ramban, Vayikra 11:13).

Further support for this “spiritually harmful” approach can be found in the Talmud’s statement (Yoma 13a) in the name of the school of R. Yishmael that

While R. Yishmael’s statement refers to all sins, it is based on a verse which prohibits forbidden foods.   And because food physically enters our bodies, his statement has been applied by later thinkers with particular force to the eating of non-kosher foods.  Rabbi Moshe Hayyim Luzzatto, for example, states that “forbidden foods bring impurity into the heart and soul of a person, until the Divine sanctity departs from him… and eating these foods is worse than any other sin in this respect since the forbidden foods literally enter a person’s body and become part of his flesh” (Mesilat Yesharim, ch. 11).

This way of thinking has had some influence in a number of areas of halakhah.  For example, when a person who has a life-threatening condition must eat on Shabbat and there is no available kosher food, is it better to slaughter (and salt, and cook) a kosher animal, or to feed her already prepared non-kosher meat?  One of the Ba’alei HaTosafot ruled that it is better to feed her the non-kosher meat, since the level of violation is much less severe.  Or Zarua strongly argued against this.  First, the sick person might be repulsed by such meat.  Beyond this, once one can override prohibitions to save a life, it is better to violate Shabbat, although it is a weightier prohibition, since the non-kosher meat will have a harmful spiritual impact on the person who eats it (Or Zarua, 2:108; and see Shut Meishiv Davar, 1:20).

Another example, closer to home, is a debate that arose in the Rishonim whether it is permissible to have a non-Jewish wet-nurse for an infant.  The Talmud seems to have no problem – from the perspective of the kashrut of the milk – with a non-Jewish wet-nurse (Avodah Zarah 26a).  In other places, however, there is a hint that there might be a problem with such milk (see Yevamot 104a, Tosefta Shabbat 10:14).   The general consensus that emerges from the Rishonim was that while this is not forbidden as a matter of halakhah, it is a practice that should be discouraged, because when the infant nurses she will ingest the taste of the non-kosher foods that the wet-nurse has eaten earlier (Rashba, Ritva and Meiri on Yevamot 114a; Ritva, Avodah Zarah 26a).

Following this, Rema (YD 81:7) rules that if a Jewish wet-nurse is available, a non-Jewish wet-nurse should not be used, since her milk will “clog up the heart” of the infant.  It should be noted that this is not a statement about non-Jews per se; it is about their diet.  Thus, Rema also states that one should not use a Jewish wet-nurse if for whatever reason she has eaten non-kosher foods.  Finally, states Rema, the infant himself should not eat such foods, “since all this will damage him in his old age.”

This concern is treated by some poskim quite seriously and by others only as a nice “pious behavior”.  When it comes to meat and milk, I do not feel that there is a need to be strict.  Since eating meat and milk together, when they have not been cooked together, is not something that the Torah forbids, it is hard to say that such food has a metaphysically harmful quality.  In addition, it is not at all clear that the Rabbis treated meat and milk eaten together as a forbidden food. What they did was to forbid the act of eating them together.  And such a prohibition is not relevant to a one-year old toddler.

In short, both as a matter of halakhah and of metaphysics, it is permissible to give your toddler milk to drink with her meat, if done for her benefit, either for her health or simply because she wants it. 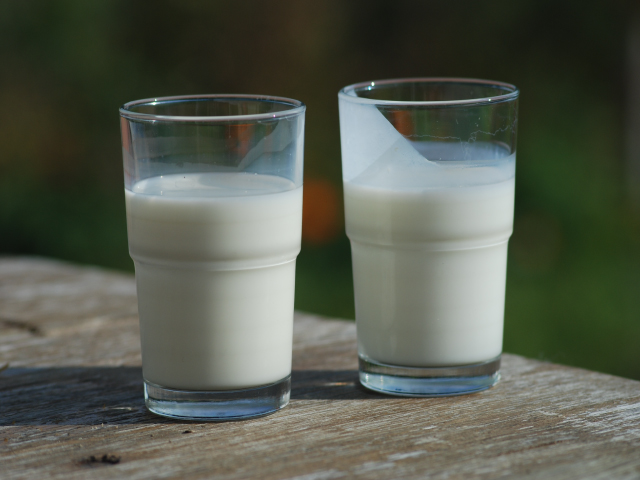 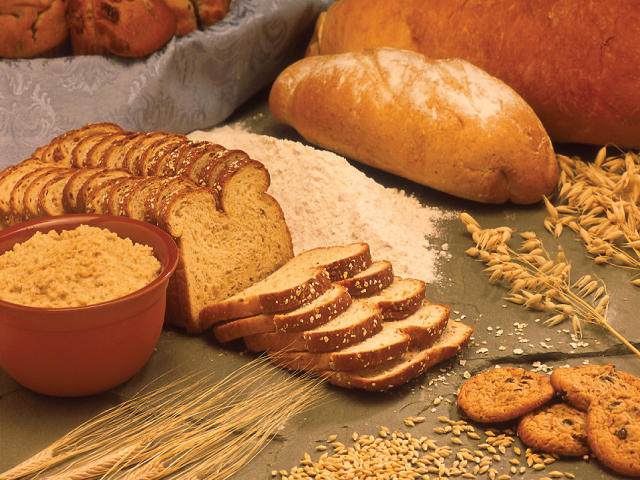 Birkat HaMazon and the Oral Torah 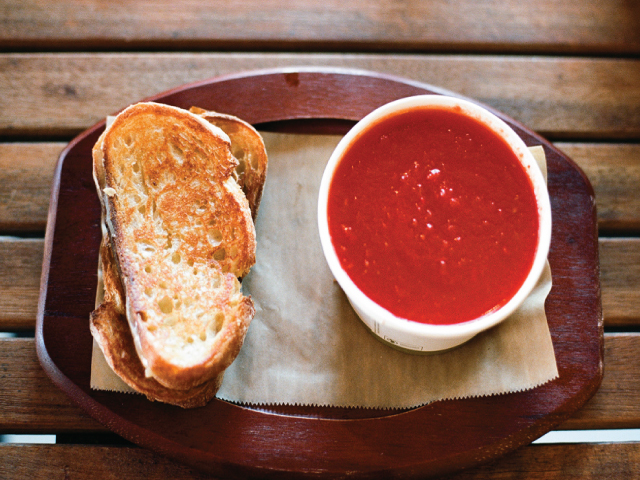