You are here: Home » Torah » Sefer Vayikra » Acharei Mot » May a Husband Give His Wife Supportive Touch During Childbirth? – Part 2

May a Husband Give His Wife Supportive Touch During Childbirth? – Part 2

May a husband hold his wife’s hand or give her a massage during childbirth, according to halakhah?  We began to answer this question last week and came to the following interim conclusions:

It would seem, then, that during childbirth, even when she is in niddah, her husband should be permitted to give her a massage if she requests it, or even if he just senses that it would be helpful for her state of mind.  And yet, a number of poskim forbid this.  On what basis do they make such a claim?

The point of departure of this restrictive position is the ruling Rav Yosef Karo in Shulkhan Arukh (YD 195:16-17) that prohibits all touch, even medical in nature:

Rema, in contrast, states that such touch is permissible when necessary:

But some say that if she has no one else to attend to her, it is all permitted.  And this is our practice, if she is in great need of this… It is thus certainly permissible for him to take her pulse when there is no other doctor, if she needs him to do so, and if there are risks attendant with her illness.

What is this debate about, and why should physical touch be so much stricter – at least for Rav Yosef Karo – than everything else?

To better understand this, we must turn to a number of verses in this week’s parashah.  In its list of forbidden sexual acts, the Torah forbids a man to have intercourse with his wife when she is in niddah (Vayirka 18:20).  The punishment for this sin is karet, divine excision (20:18), the same as for many of the other forbidden sexual acts.

The simple sense of these verses is that while in niddah only intercourse is Biblically forbidden.  The Talmud, as well, seems to treat all cases of sexual touch as rabbinic, and not Biblical, violations.[1] Based on this, Ramban argues strongly that any sexual act or touch that falls short of actual intercourse would only be prohibited on a rabbinic level.[2]

Rambam complicates this picture.  He states that sexual touch is indeed Biblically forbidden. He points out that while the Torah refers to intercourse when discussion the punishment of karet, it uses a different phrase when prohibiting the act.  The prohibiting verse states: “And unto a woman who is in her menstrual impurity, you shall not draw near, to reveal her nakedness.” (18:20). This difference in formulation, for Rambam, indicates that although only intercourse is punishable by karet, all forms of sexual touch – anything that can be defined as a “drawing near to reveal her nakedness” – are Biblically forbidden.

In support of his position, Rambam cites a passage from Sifra,[3] the Tannaitic halakhic midrash on Vayikra, that reads the verse in this broader way.  Ramban rejects this, stating that the Sifra might be merely an asmakhta (a Biblical support for a Rabbinic law), and regardless, it is against the authoritative position of the Babylonian Talmud, and thus must be rejected.

[As an aside, it is worth noting that in three places Rambam rules that certain sexual acts are Biblically prohibited based on passages from Sifra and against the simple meaning of the Babylonian Talmud: (1) sexual touch that is not intercourse; (2) pre-marital intercourse;[4] and (3) sex between two women.[5]  Interestingly, the verses relevant to these prohibitions all appear in our parashah (18:20, 19:29 and 18:3).]

Poskim debate whether the halakhah follows Rambam or Ramban.[6]  It is clear, however, that touch that is neutral and non-sexual would at most be a rabbinic violation, even for Rambam.[7]  What, for Rambam, is the line between sexual and non-sexual touch?  Rambam answers this question differently in different places.  In his short list of the mitzvot he includes even acts that involve no physical contact, such as “beckoning and hinting,” since these acts could eventually lead to intercourse.  In contrast, in Sefer HaMitzvot (Lo Ta’asei, 353), he limits this prohibition to “fondling (or “hugging”), kissing, and similar lustful acts.”

In his authoritative Mishneh Torah (Issurei Biah 21:1), Rambam defines this category quite narrowly.  He states that the Torah forbids: “intercourse by ‘way of limbs’ (e.g., oral or manual), or fondling or kissing in a lustful way, deriving sexual pleasure through the bodily contact… acts that bring about sexual intercourse.”   Only acts that are highly sexual and sensory in nature, and also are an immediate precursor to intercourse, are included.  Thus, Rav Henkin rules that the only touch that is Biblically prohibited from Rambam is the type of sexual touch that takes place “during intercourse and as a lead-in to it.”[8]  While other poskim define “sexual touch” much more broadly, they do so without reference to Rambam’s own definition. It is clear to me that Rav Henkin’s position is the correct one.[9]

Let us now return to Shulkhan Arukh and Rema’s ruling regarding a husband assisting his sick wife.  We saw that Shulkhan Arukh forbade the husband to help his wife get in and out of bed, or take her pulse.  From Rav Yosef Karo’s discussion in Beit Yosef, it seems that his intent is to forbid this even if his wife is suffering from a life-threatening illness, although some poskim argue that he would permit such a case.

The only way to explain Shulkhan Arukh’s stance is to state that for Shulkhan Arukh we are dealing with touch that is considered a sexual sin.  As such, one would not be permitted to transgress it to save a life, since one must be prepared to die rather than to transgress the weighty sexual sins (giluy arayot).[10]

Why is this neutral touch a sexual sin?  It is possible that for Shulkhan Arukh even non-sexual touch is a Biblical violation, but this is not supported by any source, even Rambam.  And Shulkhan Arukh permits another man to help her, which would not make sense if there were a problem with neutral touch.  It seems, rather, that Shulkhan Arukh believes that her husband’s touch will always have some sexual undertone to it, or will likely lead to sex, and it is this that defines it as a Biblical violation.  However, as we saw above, Rambam’s actual position is that only blatantly sexual touch would fall into this category. [11]

Finally, it is clear from an earlier ruling of Shulkhan Arukh (YD 195:15), that when there is no serious concern that the touch will lead to intercourse, even Shulkhan Arukh would permit it.

In consideration of all of the above, even Rav Ovadya Yosef, who normally never sways from the rulings of Shulkhan Arukh, here rules that a husband can assist his wife who is in niddah if she has a serious illness, although he prefers avoiding direct contact when possible.

For Rema, and thus for Ashkenazim, the matter is even more straightforward.  Rema rules that a husband can help his wife in such situations of serious illness when no other person can provide similar assistance.

When it comes to a man holding his wife’s hand or giving her a massage during childbirth, we are dealing with a situation of a life-threatening condition, as discussed last week.  If the wife prefers that her husband be the one to give her the massage, then he is doing something that no one else can do – giving her the comfort that his touch uniquely provides for her.  Some have argued that the fact that she wants her husband specifically to be the one to do it shows that the touch is not neutral, and hence sexual, and thus a Biblical violation.  This is clearly incorrect.  A spouse’s touch can be comforting, intimate, and calming without being sexual.  This is true even in the case of a massage provided during childbirth; such touch is not lustful or blatantly sexual in any way.  And the concern that in this situation such touch will lead to intercourse is minimal to non-existent.  Thus, in a similar case, Rav Ovadya Yosef rules that a husband is permitted to rub a medicinal salve into his wife’s skin, even in her private areas, as such touch is non-sexual and will not lead to intercourse.

IN CONCLUSION:  When a woman is in childbirth, even once she is in niddah, her husband may hold her hand or give her a massage, if she requests or would prefer that he be the one to so.  She is in a life-threatening condition, and prohibitions may be overridden to help provide her peace of mind.

[4] Ishut 1:4 based on Sifra Kedoshim, parashah 3 and against Yevamot 61b, and see Ramban, Hasagaot Sefer HaMitzvot, shoresh 5

[5] Issurei Biah 21:8 loosely based on Sifra Aharei Mot, parashah 8, and against Yevamot 76a

[8] Shut Benei Banim 1:37, sec. 7.  And see Ramban, Hasagot, Lo Ta’aseh 353, who states that Sifra was only referring to cases where the man and woman are lying together naked.

[10] Although it is debated if niddah falls into this category, see Shut Pnei Yehoshua, 42.

[11] A point made by Shakh YD 195:20. It is possible that Shulkhan Arukh rules as he does because he believes that one must be prepared to die even for rabbinic violations of sexual sins (based on Sanhedrin 75a). While there are some who adopt this position, it is a highly debated and questionable one (see discussion in Taharat HaBayit, 12:46). 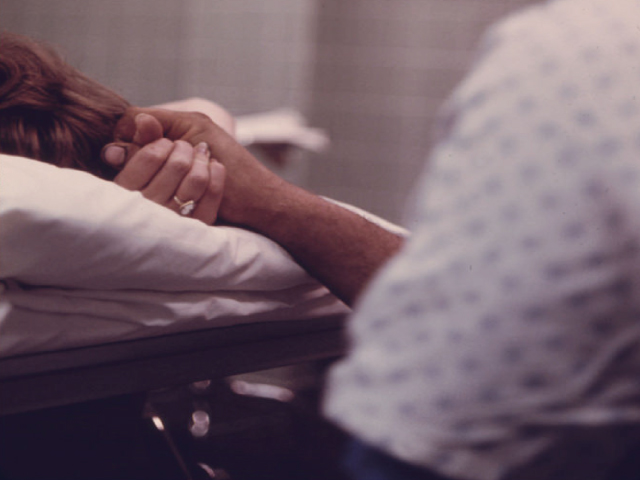