You are here: Home » Lindenbaum Center » Teshuvot » Chanukah Candles for a Friday Night Dinner at Shul

Chanukah Candles for a Friday Night Dinner at Shul

Where and How to Light Chanukah Candles When the Shul Hosts a Friday Night Dinner? It is not uncommon during Chanukah for synagogues to hold Friday night dinners during Chanukah, as it can be a good way to bring people together, and especially so for young families due to the early start time of Shabbat. However, doing so raises the question about where and when Chanukah candles should be lit by those eating their at the shul.

As is well known, Chanukah candles are lit at the home after sunset and contain enough oil or wax so they remain lit for at least 30 minutes after nightfall. If someone is not able to light at this time, say for example they do not come home from work until late, the general rule is that they can still light whenever they return home. (See Mishneh Berurah, Shaar HaTziyun 672:17) Eating out on Friday night, though, presents a problem, for one obviously cannot light after returning home from Shabbat dinner at the shul. Some make the assumption that those who attend the dinner should light Chanukah at the shul because that is where they will be eating, but this point is heavily debated.

The Tur (Orech Chaim 677) cites a teshuvah of his father, the Rosh, that one who eats with another but has a home of their own where they sleep must light at their home. The reason is because people regularly walk by their home and if they don’t see Chanukah candles lit, they will assume the person who lives there didn’t light at all. The Rashba in a teshuvah (1:542) describes a similar case, however, he appears to rule in the opposite way.

The Rashba appears to say that one who eats in a different location from where one sleeps can, in fact, join in with the lighting of their hosts, as would be the case when one sleeps at the home of another during Chanukah. The Rashba’s position is cited by Rema (Orech Chaim 677:1), who also alludes to the concern of the Rosh, and adds that because Ashkenazi custom is for candles to be lit inside the home, people outside can’t see them, and therefore one need not be concerned to light in one’s home to alleviate the problem of marit ayin.

The Taz, however, disagrees and argues that the Rashba’s ruling and the Rema’s application of it is much more limited than how it appears at first glance.

According to the Taz’s reading, the Rashba’s position would only apply in a case where one eats and sleeps in different locations each night of Chanukah, such as would be the case for yeshivah or university students who typically light Chanukah candles in their dining hall and not in the dorms. (That being said, some poskim rule that it is better for yeshivah students to light in their dorms if possible because the dining hall is a communal space and not their personal space. See Iggerot Moshe Yoreh Deah 3:14) The Taz’s ruling is affirmed by his father in-law, the Bach (677:3), Magen Avraham (677:7), Mishneh Berurah (677:12), and Aruch HaSchulchan (677:3).

Even if one wanted to argue for a more expansive reading of the Rashba’s teshuvah and the Rema’s application of it, it is not clear that it would apply in a situation where one is eating at a synagogue. Though there is some disagreement among the poskim, the obligation to light Chanukah candles rests primarily on the home, or at the very least, in a defined space where one will be spending the night. As a result, Rav Moshe Feinstein rules (Iggerot Moshe Yoreh Deah 3:14) that if one is traveling the entire night and does not go to sleep, they would not be obligated to light Chanukah candles. Based on all this, we can draw the conclusion that the only one who might be able to fulfill their personal obligation by lighting candles in a synagogue is one who is spending the night there.

How then should one proceed with lighting candles on Friday night? Because it is extremely dangerous to leave an unattended fire burning in one’s house, this leaves one with the following options:

One final point: At a communal meal on Friday night, there remains an additional question about where Shabbat candles should be lit. Unlike Chanukah candles, which are primarily connected to one’s home, Shabbat candles are connected more so to where one eats (See Mishnah Berura 263:39), and therefore they can be lit in shul, ideally in the same room where the dinner will be eaten. 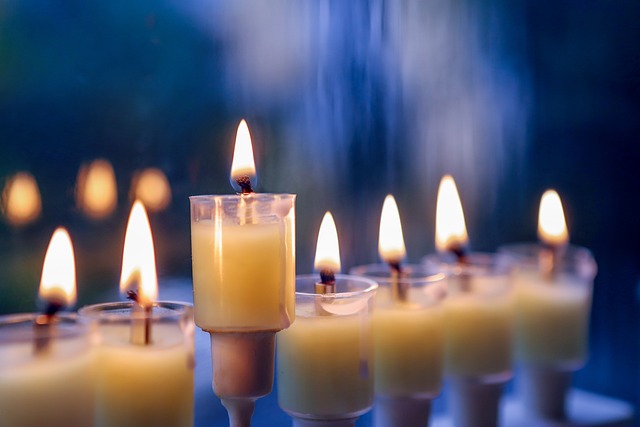