You are here: Home » Lindenbaum Center » Teshuvot » Does God Play Dice with the Universe? Games of Chance and the Theology of Purim Copy

Does God Play Dice with the Universe? Games of Chance and the Theology of Purim Copy 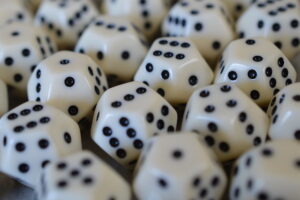 Rabbi Yair Bacharach (1639-1702), one of the most important German halakhic decisions of the premodern era and author of the responsa, Chavot Yair, was a student of Rabbi Mendel Bass, (who was himself the student of Rabbi Yoel Sirkis, the Ba”Ch). The Chavot Yair was considered a leading halakhic authority of his time and was the rabbi of the German towns Koblenz, Mainz, and Worms respectively. In addition to his halakhic expertise, he was also an authority in science, history, music, and poetry and actually authored a 46 volume encyclopedia that has yet to be published.

In this teshuva we see the Chavot Yair in his role as a community rabbi addressing wild behavior that took place amongst his students on Purim. After dining (and drinking) together, each student contributed a silver coin (one Reichsthaler) to participate in a raffle for a silver cup. The first drawing was discounted because it was found that the lots were not set up properly. In the second drawing, it was discovered that one of the contributors’ names had been excluded from the raffle, but the winner made a deal with the excluded party to pay them four Reichsthalers in exchange for not objecting to the outcome. Other members of the group, however, disagreed and demanded a third drawing.

The question addressed by the Chavot Yair is whether the flawed second drawing is legitimate given the agreement made by the winner with the excluded party.

In the end, he rules that the second drawing is invalid  based on both Talmudic precedents and also a theological claim. He argues that games of chance are a tiny moment when God directly  affects the outcome of an event. The winner of a lottery such as this is not chosen by  chance but rather by the Divine will, but only as long as the game is played by the proper rules. If the rules are broken, he explains, God will not intervene for God does not play with rigged dice.

Though some rabbis might see games of chance such as this as frivolous and possibly dishonest, the Chavot Yair saw it as a way for these students to  invite God’s presence in a concrete way to their Purim seudah. This Purim, let’s all find ways to bring the divine into our homes through music, food and even possibly drinking and games of chance. And at the same time, we must remember that if the rules are not kept, if some control is not maintained, God will not be part of it.