You are here: Home » Lindenbaum Center » Teshuvot » Fulfilling the Mitzvah of Mishloach Manot through the Shul’s Purim Basket

May one fulfill the mitzvah of Misloach Manot through a donation to the shul to have their name added to Purim baskets that are going to multiple receivers, and where each basket has multiple names? Does it matter if one is able to do this even without making a donation? Ownership of the food

The overwhelming consensus is that you must own the משלוח מנות you are sending in order to fulfill the mitzvah (however, see Rav Sternbuch, Teshuvot vi’Hanhagot, 1:406, who disagrees).

How would one gain ownership of two pieces of the food in the basket, or a portion of them?

Here’s how – The shul (i.e., the rabbi, the Executive Director, someone they designated) can hand the baskets to a third-party (someone who cannot be considered the original owner of them). This third party would then take possession of them for the people who were sending them.

For now, let us assume that the minimum size of Mishloach Manot is a kezayit of each food. The shul representative would give the baskets to this third part, who would take possession of them on behalf of the senders. This is based on the principle of zakhin li’adam shelo bi’fanav – that when a person wants to gift something to another, or transfer ownership for something that has already been paid for, a third party can take possession of the object on the half of the receiver (Rambam, Zekhiya u’Matanah 4:2, SA HM 122:1). This works, as stated, in the case of a gift, so it is irrelevant whether the sender paid for the basket or not. The fruit is now in his possession.

The third party would take possession on the half of the senders with the intent that each sender should own 1 kezayit each of two separate pieces of food in the baskets in which his or her name appears as a sender. This will work if there are enough kezayitm to go around. If not, but there is a total sufficient number of kezaytim in all the baskets to be divided between all the sender, then the shul representative should say something along the lines of “Everyone’s name on the first basket that I am transferring to the third party, should own 1 kezayit each of two foods, then everyone’s name on the 2nd basket, owns 1 kezayit each of two foods, except for anyone who already owns something in one of the previous baskets, and so on until the end.”

What is the Minimum Amount Needed to Fulfill the Mitzvah

Although we have now achieved ownership of a kezayit of two food items in the baskets, this may not suffice.

We have been assuming that the minimum amount is one kezayit per food item. But this is actually a major debate in the poskim. Here are the positions regarding the minimum:

For most of these positions, Ashel Avraham, Butshash –

What is this debate about? First, as stated, it might be a simple question of the meaning of the word maneh, which suggests a meaningful portion (see Arukh HaSulkhan, OH 695:15). But even more so, the debate is a conceptual one: What is the purpose of Mishloach Manot? Is it:

Poskim draw halakahic conclusions from this debate. If it is about the receiver, then one does not fulfill the mitzvah if the food was never received, as opposed to if it is about friendship and the giver – this could be accomplished if the receiver knows that it was sent to her, even if it got lost along the way. Similarly, if it is sent anonymously, this would work if the goal is to help someone’s seudat Purim (receiver), but not if it was to create greater friendship.

How does this play out in terms of the minimum amount?

Probably the position of a perutah (#1) fits into the approach of sending a gift of friendship, as it is the size of a minimum gift. This position is largely rejected by the poskim.

So, given these various amounts, and excluding the perutah possibility, distributing ownership between the baskets would only be possible if we adopt the kezayit approach, as the other two – a minimum meal and the significant gift – are too large to allow everyone to own such this amount of food in the baskets.

There is No Sense that Anyone Sent to the Receiver Personally

What about the fact that the receiver knows only that all the people on the list donated to him by some minimum contribution, but that no one sent to him specifically? What friendship is created by the fact that I know that each sender put her name on my basket and a dozen others? Also, as we have seen, that approach focuses on the giver, and here there is no emphasis on a particular giver. Thus, this would almost definitely does not work if the focus is on friendship (b, above).

If, however, the focus is on contributing to the meal (a, above), then logically it would work. The focus here is on the receiver, and in this case you have contributed to the receiver’s meal, even though she doesn’t connect to any particular sender.

If the shul gifts the baskets to a third party, such that everyone owns a kezayit each of two foods, as described above, one can assume that this fulfills the mitzvah of Mishloach Manot. It is of course better to do it the normal way, but when that option is not available, as might particularly be the case in the time of COVID, one can rely on this method. Again, this requires that the shul do the transferring of ownership, as discussed. 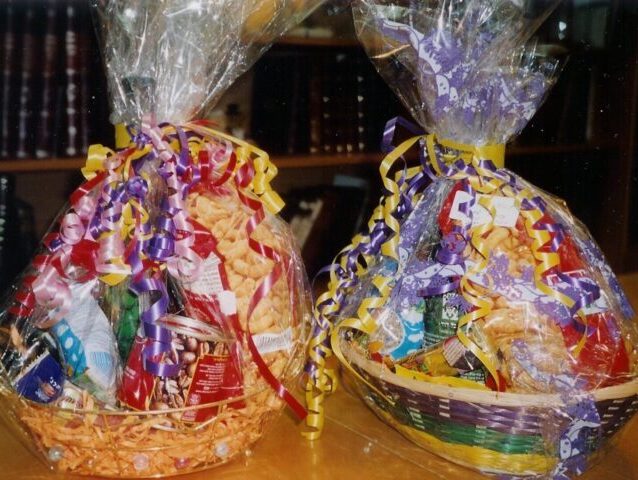