You are here: Home » Lindenbaum Center » Teshuvot » Meat After Parmesan On Pizza

Meat After Parmesan On Pizza

A group of friends were wondering about waiting time (for Kashrut reasons) between dairy and meat. Specifically, now that many pizzerias use cheese blends that include parmesan with the mozzarella on their pizza, would that obligate folks to wait their respective minhag times after having a slice of pizza before having meat-based food?

Yes, one should ideally (לכתחילה) wait their respective wait time for hard cheese after eating a Parmesan sprinkled pizza.  But, if it is too much of an imposition (בדיעבד), one is allowed to eat meat after waiting no longer than they usually wait for non-hard dairy foods.

Briefly, here is why:

The Rema (YD 89:2) says that we should be “machmir” and wait before eating meat after eating hard cheese the same amount of time we wait for eating dairy after we ate meat[1]. There is, however, an extensive debate among the poskim about which cheeses fall under that category. Some consider Parmesan a hard cheese, others believe it only applies to hard Swiss cheeses, pungent, aged, and with holes. (See the nosei keilim, Darkhai Teshuva and others on YD siman 89.)

Even if we were to categorize Parmesan as hard cheese, for our purposes there is also the lenient opinion of the Yad Yehudah (YY) quoted by the poskim. (See for example Darkhai Teshuva YD 89:40 and many others). The YY (YD “short commentary” 89:30) says that the stringency of waiting longer for hard cheese does not apply when the cheese was melted. Cheese on a slice of heated pizza is melted and soft, making the Rema’s chumra of waiting extra time after eating hard cheese inapplicable in our case, according to the YY.

The Badai Ha’Shulchan (YD 89:2) argues that the leniency of the YY depends on the reasons why we have to wait when switching from meat to milk. According to the Rambam (Machalot Asurot 9:28), we have to wait because we are concerned that some of the residue remains stuck in the eater’s gums or teeth. If we wait long enough, that food decays and no longer has the status of halakhic food.  Rashi (Chulin 105A) thinks that the reason we wait is because heavy foods take time to digest, and until they are fully digested, they are still present and come up in your mouth. Eating the opposite food than the one you ate would, therefore, be considered me’drabanan as a form of mixing milk and meat. Melted cheese, the Badai Ha’shulchan explains does not get stuck in the gums or teeth and therefore obviates the concerns of Rambam, but the taste, he claims, remains in the digestive system for a while even if it was melted, keeping Rashi’s concern intact. The Badai Ha’shulchan, as a result, believes that according to Rashi one would have to wait extra time even when eating melted hard cheese.

I do not agree. The reason hard cheese takes longer to digest, according to Rashi, is because of its hard texture. If the food is softened, it will obviously digest faster. Therefore, based on the YY, one would not have to wait additional time when eating a pizza that has melted cheese on top, even according to Rashi.

There are, however, poskim who argue, based on the context in which the YY offered his leniency, that he is only referring to cheese that is dissolved and mixed into another food, not when it was merely melted ONTO another food. That seems to be the opinion of the Ben Ish Chai (parshat Shlach2 no. 15), Rav Eliyashev (Sefer Ha’kashrut Ch. 10, FN 121), and is also the opinion of Reb Shlomo Zalman Auerbach (Halichot Shlomo, Moadim, P. 383, FN 15). A close read of the YY, however, makes it clear that the extenuating factor for his leniency is that it is soft, not that it dissolved.

His emphasis seems to be exclusively on the fact that the cheese was softened. The fact that in the scenario he is discussing the hard cheese was also dissolved and is mixed in with other foods seems immaterial to his decision.

Given all the above, I think one should leketchila, when possible, wait however long they usually wait when eating hard cheese, since that seems to (לכאורה) be the opinion of the Ben Ish Chai, Rav Eliyashev, and Rev Shlomo Zalman Z”L.  But, bedivied, if it is too much of an imposition, there is a strong basis in halakha to pasken leniently, especially if one eats the pizza while it is somewhat hot and the cheese still melted.

There is one more angle to explore. The question implies that they use both cheeses, hard and soft.  If they use very little hard cheese could one say that it becomes batel in the soft cheese?

It would seem to me that bittul would not be a viable consideration here because 1) It is hard to ascertain an exact measure of how much hard and non-hard cheese the baker uses for his recipe, making it impossible to say with certainty that the soft cheese is indeed is 60 times the amount of the hard cheese to nullify its taste. 2) The two chesses look different enough to make them separate and noticeable. The halakha is that we only apply bittul when the prohibited food is completely subsumed in the permissible food, to the point where one cannot separate one from the other. If the issur is obvious and distinguishable from the heter, bittul does not apply. Consequently, since the hetter is not based on bittul, one would bedieved not have to wait the extra time even if there was no other cheese on the pizza besides the Parmesan.

For further discussion, and a different conclusion, see here*: http://www.shemayisrael.com/parsha/halacha/Shavuos_Issue_Hard_Cheese.pdf

*I am indebted to R. Lebovitz for help with some of the sources.

[2] The debate is based on different understandings of the Shach’s definition of hard cheese. The Shach (89:15) says that after six months cheese is considered hard. The machmirim believe that its literally about time, whenever a cheese aged for six months it has the status of hard cheese and requires a longer waiting time. The makilim believe that it is a combination of time and pungency; that only those cheeses that become sour and pungent with age acquire the more chamur status of hard cheese which requires a longer waiting time. The Taz (89:4) very emphatically agrees with the makilim. He writes that only מי שנוהג בתוספות פרישות וזהירות is allowed to take upon themselves the more stringent approach of waiting extra time for aged cheese that is not sour and pungent. 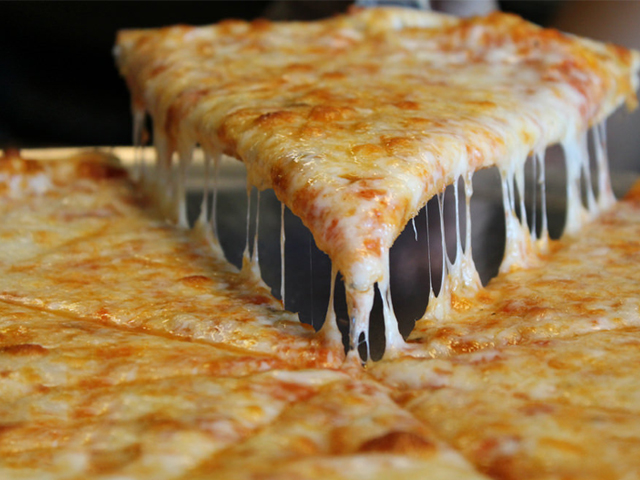