You are here: Home » Lindenbaum Center » Teshuvot » Publicizing the Miracle of Chanukkah to All

Publicizing the Miracle of Chanukkah to All 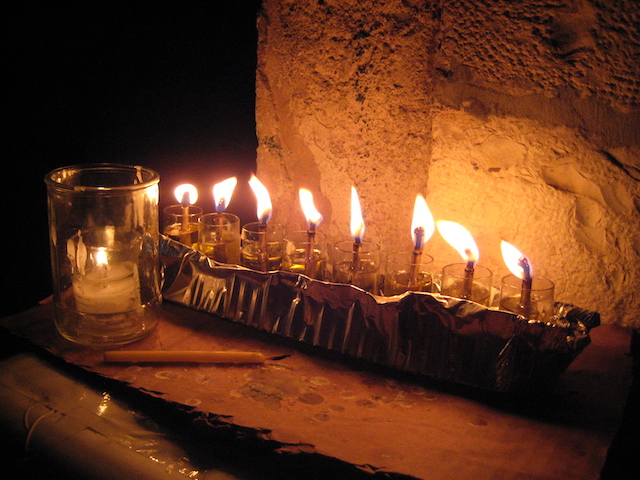 According to the Talmud (Shabbat 23b), we light candles on Chanukkah to publicize the miracle of the holiday (pirsumei nisa). This goal serves to determine where and when the candles should be lit so they can be seen by the maximum number of people. One lights at the entrance of the home or a window that faces outside thereby making them easily visible to all who pass by. Furthermore, the candles are lit at night rather than during the day, even though the miracle took place then as well, in order to ensure their light will be most visible to others against the darkness. The desire to publicize the miracle of Chanukkah has even led to the creation of new customs in which Chanukkah candles are lit in places not by mandated by the Talmud, such as at synagogue and Chanukkah parties, just so they can be seen by large groups of Jews.

When the concept of pirsumei nisa is taken to an extreme, it leads to a fascinating question. Is it possible that non-Jews are included in the target audience?  Other mitzvot established in commemoration of a miracle, such as the reading of the Megillah on Purim, were clearly instituted only for Jews, but is there any reason to think that the lighting of Chanukkah candles is different?

Rabbi Shimon Sofer (1850-1944), the grandson of the Chatam Sofer, rules that a Jew who finds himself alone among non-Jews must still light Chanukkah candles, for pirsumei nisa applies to non-Jews as well (Hitorerut Teshuvah 1:153). He sees this as a fulfillment of Ezekiel’s prophecy (38:23): “Thus I will manifest My greatness and My holiness and make Myself known in the eyes of many nations. And they shall know that I am the Lord.” This verse expresses a concern that God voices throughout the Torah, that God’s name be sanctified not only among Jews but among non-Jews as well. In the context of Ezekiel’s prophecy, this will be achieved through the Jewish people’s return to the land of Israel, but Rabbi Sofer explains that an aspect of this mission can be achieved in the lighting of Chanukkah candles. When non-Jews see the Chanukkah candles of their Jewish neighbors, they will inevitably ask them about their meaning. Though Jews have no need to proselytize, they can still take the opportunity to share the story of Chanukkah and the miracle of the oil, and perhaps convey a greater appreciation for God, faith, and the belief in justice overcoming oppression.

To justify his ruling, he cites Rashi’s interpretation of a strange word that appears in the Talmud when discussing the laws of lighting Chanukkah candles.

The key word in this text is Tarmudai. Rashi explains that it is the name of a particular nation of woodcutters, who sold wood in the market and remained there until after sunset, so that those who were in need of it for fire or light could find it available for sale. If the Chanukkah candles must remain lit “until the Tarmudai have stopped coming back from the market” it appears that pirsumei nisa applies to them as well.

It should be noted that Rabbi Sofer’s understanding is particularly unusual because it is a departure from the dominant mode of halachic discourse which tends to privilege Jews as a nation that dwells apart and eschews proselytizing. However, it appears that he sees the light of the Chanukkah candles as not only commemorating a past miracle but perhaps offering something miraculous in the here and now: the ability to serve as a bridge between Jews and non-Jews. At a time when it is easy to feel distant from those around us, it is important to remember that the light of the Chanukkah candles can serve as a powerful tool to bring us all closer together.

It appears to me that one who lives exclusively among non-Jews is still obligated to light Chanukkah candles outside the doorway of their home or in a window [facing outside] in order to publicize the miracle to non-Jews. They will ask, “What are these?” and one can use this as an opportunity to tell them about the story [of Chanukkah] and the essence of the miracle. It is a fullfilment of the verse “Thus will I manifest My greatness and My holiness, and make Myself known in the sight of many nations. And they shall know that I am the Lord,” and other verses that teach that the Holy One Blessed be He is concerned about the profanement and sanctification of His name amid non-Jews. A hint to this can be found in the fact that the time for lighting [Chanukkah candles] is until there are no Tarmudians coming back from the market. From Rashi’s language it can be explained that until that time one is obligated [to light Chanukkah candles], for until then customers will come to buy wood from them and the customers are Jews. [However] From the interpretation of Rif there is no proof for one can say that the Tamudians are Jews and are called Tarmudians because of the wood the sell which is called Tarmud.