You are here: Home » Lindenbaum Center » Teshuvot » Snow on Shabbat

I am in Vermont for business. I have rented an apartment and bought myself pots to cook with. There is no convenient mikveh, but there is a lot of snow. May I tovel the pots in the snow? Would I be able to use them without tevilah? Would you also give me some guidelines for snow on Shabbat — is it muktzeh? May I shovel it? Is there anything else I should be aware of?

In this teshuva I will present some guidelines for snow on Shabbat. I will address the question about using snow for tvilat kelim in an upcoming teshuva.

Below are guidelines regarding snow on Shabbat:

Muktzeh: Rain, even if it falls on Shabbat, is not muktzeh or nolad[1] because it is already present, to some degree, in the clouds (See Eiruvin 46a, Shulkhan Arukh OH 338:8 and Mishne Brurah, no.30). The consensus of the poskim is that this applies to snow as well (see, for example, Shmirat Shabbat 16:44, n.110 and 15:36 in the name of Rav Shlomo Zalman Aurbach). Rav Moshe disagrees and states that snow is nolad, unlike rain (Iggrot Moshe OH 5:22, no. 37). We rule in accordance with the consensus position.

Snowballs and Snowmen: As snow is not muktzeh, one may pick up and throw snow on Shabbat. However, one may not make snowballs or snowmen as this is a form of building a new object (boneh bi’keilim—which is forbidden when one makes something from scratch). Although the snowball has a very short life-span, building even an impermanent object is forbidden at least on a rabbinic level (see Shabbat 146b, Beitzah 32b and Rambam, Laws of Shabbat 23:6). However, throwing a snowball made before Shabbat is permitted and not considered to be a form of deconstructing (soter) (see Shmirat Shabbat, ibid, n. 109, in the name of Rav Shlomo Zalman Aurbach, who compares this to tearing open a package, or rather, destroying something that is intended to be destroyed).

It should be noted that Rav Moshe Stern (Be’er Moshe 6:30) rules that it is permissible for children under the age of Bar and Bat Mitzvah to make snowballs although he absolutely forbids making snowmen (and by extension, snow forts). He argues that making snowballs is not boneh as one is not actually making something new and it is also something highly impermanent, made with the intent to be destroyed. Nevertheless, once the child is Bar or Bat Mitzvah age he forbids making snowballs, because in the process of making the snowball one squeezes the snow and produces water, which is a prohibited act (see SA OH 320:11). He is presumably less concerned with this prior to the age of Bar or Bat Mitzvah, since there is some debate among the poskim as to whether and under what conditions such squeezing is forbidden (see MB no. 37, and in Beiur Halakha, s.v. Yizaher, in the name of Magen Avraham).

I am unconvinced that Rav Stern has eliminated the concern of boneh here, but regardless, I would agree that one need not prevent children under Bar and Bat Mitzvah age from making snowballs and having a snowball fight on Shabbat, given that it is not so clear cut whether this is actually a form of boneh. Children are often very excited about freshly fallen snow, and prohibiting them from making snowballs can serve to make Shabbat feel onerous to them. To reiterate, this only applies to making snowballs. One should not allow children to make snowmen and snow forts as this is unquestionably an act of boneh.

Snow Angels and Writing in Snow: One cannot make snow angels and certainly not write in the snow as this is a form of writing (even a more temporary form writing, such as using a finger to draw in sand or drawing with liquid on a table, is forbidden, see SA OH 340:4). Similarly, one may not write in the frost on a window with one’s finger (Mishne Brurah, ibid., no. 20).

Crushing snow and ice: A person may not squeeze snow or crush ice to turn it into water as that is making something new (SA OH 320:9, and MB, no. 33). However, one is permitted to crush ice into smaller pieces (see 320:10). A person should also be careful to not rub snow between her hands as a way of washing since she will be turning it into water in the process (SA OH 320:11).

Walking on Snow: It is permissible to walk on snow even though it will crush the snow and produce water (SA OH 320:9). This is permitted even if the bottom of the shoes make an impression in the snow (Yabia Omer, OH 5:28), since this “writing” in the snow is two degrees removed from what the Torah forbids: one, the writing is not permanent, and two, it is done in an unusual manner. In addition, it is being done unintentionally and without any interest in the outcome (eino mitkaven, psik reisah di’lo ichpat lei).

Sledding: Technically, it is not a violation of Shabbat to go sledding on Shabbat, assuming that there is an eruv. One crushes or compacts the snow just as one does when walking. Similarly, the grooves created by the sled are similar to the impressions left by one’s shoes when walking, which is permitted. However, sledding may fall into the category of uvda di’chol, weekday activity. How do we evaluate this? If one uses a great deal of exertion, it might be a problem (however, it might not, see Tur OH 301 in the name of Sefer HaMitzvot; SA OH 301:2, and MB no. 5). If one is totally immersed to the extent that one forgets or loses the sense that it is Shabbat, then it certainly is uvda di’chol and should not be done. One must be mindful of the concern raised earlier: telling children that they cannot play in freshly fallen snow can make Shabbat feel onerous and breed resentment. Sledding does not have any of the halakhic concerns that exist in regards to making snowballs, and from a halakhic point of view, it is certainly the more preferable option of the two activities. In the right context, sledding for fun may be allowed. Because context is critical, it is advisable to discuss any particular case with a halakhic authority.

It is permissible to use a sled to transport small children to shul, especially if there are no reasonable alternatives.

Safety concerns – Sanding and Salting: On Shabbat, it is permissible to put salt or sand on snow or ice. From a halakhic standpoint, sanding is better than salting, as salting will cause the snow to melt whereas sanding will not. Nevertheless, one may salt if necessary. Although one may not crush snow to produce water, there is a debate whether one may act in a way that causes snow to melt if he does not directly crush it. Mishne Brurah seems inclined to be lenient, especially in cases of need (see MB OH 320:41, and also MB 318:107), and most cases of salting fall into this category. If there is any concern that someone might slip and hurt himself, you are not only permitted but obligated to prevent possible falls. Sand that has been purchased for this purpose is not muktzeh as it has been designated for use. In cases of real safety concerns one may use any sand even if it is muktzah (see Rema, OH 308:6).

Shoveling Snow: Rav Tzvi Pesach Frank (Har Tzvi, Tal Oros, Soter) rules that if snow has significantly hardened, shoveling may be considered a form of boneh (making a path) or soter (deconstructing of the present snow), and one should be strict in such cases. Even if the snow has not hardened, we generally do not do activities on Shabbat that require exertion (tircha). However, such activities are allowed for the sake of a mitzvah, such as getting to shul, or if there is any danger or risk by leaving the walk not shoveled. In such circumstances, one may shovel the snow, provided it has not hardened. All of this refers to shoveling a sidewalk or driveway. Shoveling off dirt or grass raises other concerns, such as smoothing out the ground below.

“Muktzeh” literally means “set aside.” It refers to an object that was set aside and placed out of use — intentionally or by default — when Shabbat began. Examples would include: money, rocks, and an expensive and fragile vase. “Nolad” means “born,” and refers to something that was newly created on Shabbat, such as an egg laid by a hen. Halakha dictates that neither may be moved on Shabbat. 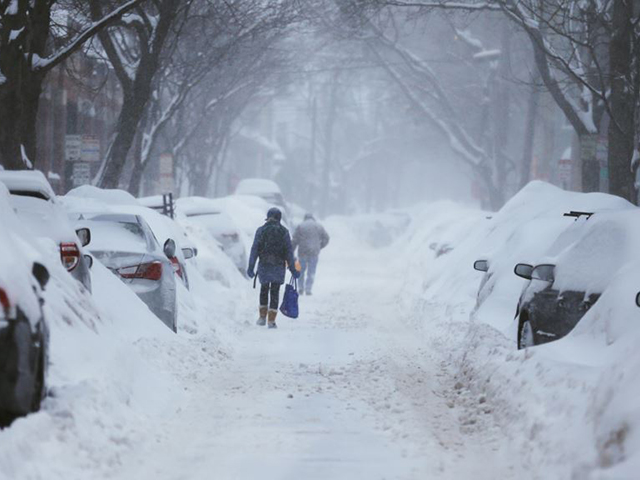