You are here: Home » Lindenbaum Center » Teshuvot » Yichud in a Shul

Yichud in a Shul

I am the rabbi of a shul, and recently I was working there after it had already grown dark outside. I realized only later that there were two women working in the shul office on a different floor at the same time. To avoid yichud, I thought that she could lock her door and I could lock mine, but realized as I have a master key that wasn’t much use. One woman is married and the other is single. There are cameras in the building but not covering all areas. The front door was locked, but there are several people with keys.  In the end, I gathered up my belongings and left as soon as possible.  Was there any way to avoid yichud in this situation?

As a general rule, the laws of yichud would not allow a lone man to be in a private place with one or even two women if he is not married to one of them (Shulkhan Arukh, Even HaEzer 22:5).  There are a number of factors which are relevant here: (1) one of the women was married, (2) the presence of security cameras, (3) you were on separate floors and had the ability to lock your doors.  Let’s explore these one by one.

One woman was married.  A married woman is allowed to be in a private place with another man if her husband is in the city (22:8).  However, a number of poskim state that this does not apply when she is not at home, even if her husband knows where she is (Binat Adam, as quoted in Pitchei Teshuva, no. 7).  In general, I believe that one can follow the poskim who permit such a case, since it is always possible that her husband can drop by.  In this case, where the door to the building is locked, and the husband cannot drop by unannounced, it would still be considered yichud in my opinion.  If the door were not locked, and it was thus not a case of yichud for the married woman, her presence would serve a type of a chaperone role, and it would not be a case of yichud for the man and the remaining single woman according to most poskim (see Tzitz Eliezer, 6:40, chapter 10).    [It might be different if the married woman would be likely to separate from the others and go to a different place in the building, see Rema EH 22:5.]

The video cameras.  If you have access to the computer that is recording the feed, and can easily wipe the recording without raising suspicion, then the presence of the video cameras would not help.  If, on the other hand, you cannot erase the recordings without raising questions, then if you stay in the zone where the cameras operate, it would not be a yichud situation.  This would be at least as good as a “door open into the public domain” (EH 22:9), which also applies to cases where a window allows people see what is happening inside (see Iggrot Moshe EH 4:65, no. 2).  Although people would not see anything taking place in real time, the presence of the video recording would still serve as sufficient deterrent.

Separate floors with locked office doors.   Whether yichud applies when people are on different floors, or behind locked doors in the same building when one (or both) of them have keys, is a central question in defining what yichud is all about.  Is the purpose of the prohibition of yichud to make it impossible for a sexual transgression to occur, or is its purpose to prevent situations where one may be unduly tempted?  If the former, then being on separate floors or behind a locked door shouldn’t help, since one person has free access to the place where the other person is located.     If, however, the purpose is to avoid succumbing to temptation, then a person would not, as a rule, be tempted when the other person is in a different location and out of sight, let alone behind a locked door, and such a case should be permissible.

It seems obvious to me that the latter explanation is the correct one.  Halakhic fences in general are not intended for people who are planning to willfully transgress.  Such a person will anyway not abide by these rules.  Such rules are intended, rather, for people who want to keep halakha, but who might sin due to inattention, negligence, or irresistible temptation.  These fences help such people avoid the situations that can lead to sin.  As one posek writes in regards to the laws of yichud: “We are dealing with upstanding people, and are not concerned that he or she will transgress willfully.” (Beit Shmuel, EH 22:9).

Following this approach, it shoud not be a problem of yichud when the man and woman are in different rooms, and especially if they are on different floors.  This is the position of Tzitz Eliezer (6:40, ch. 8).  Nevertheless, a number of poskim, including Rav Moshe Feinstein, are strict in such a case.

Tzitz Eliezer (6:40, ch. 8) rules that no yichud exists when a man and woman are in different rooms behind closed doors in the same building.  Since they are in different places, there is no concern that they will be unduly tempted and succumb to their baser desires.  The fact that they have access to one another and could transgress if they wanted to is irrelevant – these laws are not intended for people who want to do the right thing, not for those who are planning to sin.

Not all poskim agree with this ruling.  For example, in a case when a bride is a niddah on the wedding night, halakha demands that the bride and groom not be in yichud, since they have never been physically intimate with one another.  But let’s say they were planning on going to their apartment? Would it suffice for them to keep their front door open, and then go into separate bedrooms and close the front door when it was time to go to sleep?  According to Tzitz Eliezer, it seems that the answer would be yes.  Rav Vozner, however, forbids this, and states that in the case of “one house and two rooms, without a locked door between them – there is no yichud greater than this… for since the front door is closed, it is all like one house.” (Shiueri Shevet HaLevi, 192:4, no. 6).  Many poskim, including Rav Moshe Feinstein (Iggrot Moshe EH 4:65, no. 19) rule similarly.

Rav Moshe further states that it would make no difference if the man’s or woman’s door was locked, since the person in the room could always unlock his or her door.  Rav Vozner and others disagree and state that if the woman’s door is locked, it would mitigate some of the concern of yichud.  Their position is that the Rabbis were only concerned that the man would be the initiator; if the woman’s door was locked and he had no access, there would be no concern (see Hazon Ish, EH 34:2).  Rav Moshe assumes otherwise-  the concern is that either party could initiate; a locked door that could be opened by one of the two would serve no purpose (see also Tzitz Eliezer, 6:40, ch. 8) who writes that “it appears from the Mishna and Gemara and Rambam and Shulkhan Arukh and all the decisors that the laws of yichud and the concerns apply equally to women as to men.”).

Our case, where the woman is in an office with a locked door, but the man has a master key, would be considered yichud both according to Rav Moshe and Rav Vozner, since each person has access to the other.

To return to the core issue of different rooms (with access) – why does Rav Moshe (and Rav Vozner and others) consider this to be yichud and Tzitz Eliezer does not?  It would seem that for Rav Moshe, the possibility of transgression, even if temptation is absent, suffices to define a case as yichud. Or, perhaps more precisely, a case that could trivially become yichud (by opening a door), is already considered yichud right now.  This is consistent with Rav Moshe’s general approach to yichud, which defines yichud – both stringently and leniently – not only based on formal parameters, but to a large degree on context as well (see Iggrot Moshe EH 4:65, nos. 1, 2, 4 and 10).

Tzitz Eliezer rejects this and demonstrates, in my opinion convincingly, that according to the Gemara (Kiddushin 81a) and Shulkhan Arukh (EH 22:5), if a man and woman are in separate rooms behind closed doors now, it is not yichud, even if there are no locked doors between them.  He does nevertheless recommend locking one of the doors, to at least serve as a reminder.

Even according to Tzitz Eliezer, we must be particularly attentive to the realities of each case.  Notably, alongside the Gemara’s halakhic discussions of yichud appear stories of great rabbis who were driven to do superhuman acts of strength to satisfy their sexual desires, and only barely managed to resist sinning.  The point of these stories is that a person needs to know when following the technical laws of yichud is not enough, and avoid situations where he or she will be unduly tempted.

In conclusion, I rule like Tzitz Eliezer that when people are in different rooms and behind closed doors, there is no technical problem of yichud.  Nevertheless, a person must be honest with him or herself, and not put oneself in a situation of undue temptation.   This is all the more so in the case before us, where the location is a shul and the man in question is a rabbi.  Many cases of abuse would be avoided if our religious institutions are vigilant regarding yichud and related concerns.  And as a religious leader, a rabbi must do everything in his power to act above suspicion of any wrongdoing or indiscretion. “And you shall be innocent before God and before Israel” (Bamidbar 32:22). 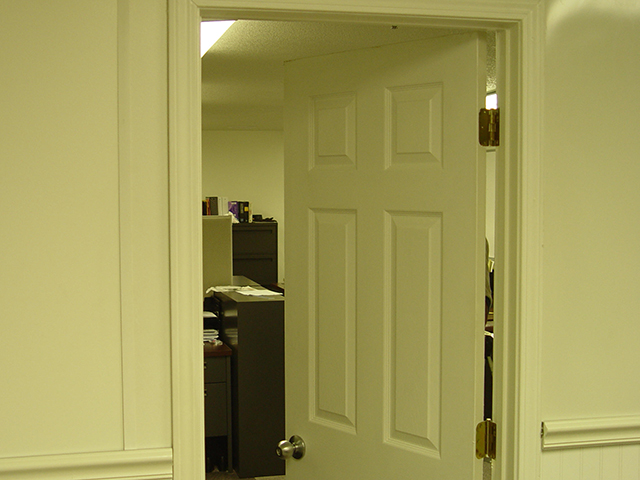